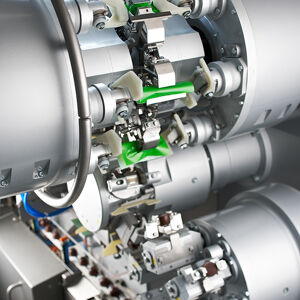 Theegarten-Pactec is the world’s leading manufacturer of continuous-motion packaging machines for confectionery, food and non-food products. In order to secure its market position, the Dresden-based company has decided to use PLM to speed up the development of new machines and its order-oriented design work. PROSTEP will be advising the company on the optimization of its PLM processes, requirements analysis and selection of the system.

Unlike clocked or discontinuous packing machines, which are also part of the company’s product portfolio, continuous-motion packaging means that hard candies, chocolates and other products are constantly in motion. In an end-to-end process, they are wrapped or folded in packaging material by a number of tools mounted on a rotating drum. The advantages of this technology lie in the higher throughput and gentler packaging process, as Dr. Egbert Röhm, managing director of Theegarten-Pactec GmbH & Co. KG explains: “Our continuous-motion machines package up to 2,300 products per minute, clocked machines not even half of them.”

“The story of our success is not a short one,” says the company’s home page. It is also a very German reunification success story. In Dresden, the company VEB Verpackungsmaschinenbau Dresden developed the first continuous-motion packaging machines to market maturity as early as 1981 and successfully exported them worldwide, even in the days of the GDR. At that time, the state-owned company formed part of the NAGEMA combine and, since 1946 had bundled the potential of a number of Dresden-based mechanical engineering companies whose owners had been expropriated after the Second World War. Following German reunification, the combine was first transformed into a stock corporation, which subsequently gave rise to a number of individual companies, including the packaging machine division.

As of 1991, the newly founded Verpackungsmaschinenbau GmbH, which comprised various parts of the original combine, traded as Pactec Dresden GmbH. It employed only a small, high-performance workforce that represented approximately 10 percent of the original company, which previously had 3,000 employees. In 1994, Pactec Dresden was acquired by the Cologne-based family-owned company Rose-Theegarten, which had been manufacturing packaging machines for confectionery products since as early as 1934. Because the site in Dresden offered advantages both in terms of the usable industrial area and available skilled workers, the company’s headquarters were moved to Dresden a few years later, as Röhm recounts: “That is certainly something that didn’t happen very often in the history of German reunification.”

In Dresden, Theegarten-Pactec now manufactures both clocked and continuous-motion packaging machines and systems for all types of small products that have to be packaged quickly: hard candies, soft caramels, chocolate products as well as stock cubes and dishwasher tablets. “We service the global market with around about 430 employees,” says Röhm. Nearly 100 of these work in development and design because the engineering effort is considerable. Even though, fundamentally, these are series machines that have become increasingly modular in design in recent years, the design engineers have to adapt them to the format of the product that is to be packaged, the desired fold type and other specific customer requirements. Each year, the mid-sized company ships between 100 and 120 machines and packaging systems.

The cross-departmental processes involved in handling customer orders are time-consuming and tie up significant capacities because the support provided by software applications is not optimal. The measure of all things is currently the ERP system. There is no independent PLM system, just a module integrated in the ERP system that manages the authoring systems’ CAD objects and data. “The ERP system also manages the order-neutral variant BOMs. This means that we have to check any number of dependencies every time there is a change,” explains Röhm. “Once we’ve got the BOM for the order, our processes work very well. However, the administrative effort required to create an order-specific BOM is huge because we force our designers to follow the production and assembly-oriented logic of the ERP processes. To speed up development, we are thinking about how we can decouple the development process more thoroughly from the downstream processes.” The aim is to speed up the offer and order process and to bring a new machine onto the market every year rather than every other year.

In 2018, as a first step, Theegarten-Pactec called in external consultants to shed some light on the shortcomings in the process and IT landscape. The Institute for Industrial Management (FIR) performed a detailed examination of the ERP-related processes, while the PLM consulting and software company PROSTEP took a close look at the PLM processes. “We weren’t thinking in terms of lofty Industry 4.0 issues but about how to better organize the existing processes involving our ERP system, as well as about topics such as variant and BOM management, how to cut down the administrative overhead for our design engineers, and how to make the knowledge we have about our machines more readily available,” emphasizes Röhm.

The consultants came to the conclusion that the interaction between ERP and PLM needed to be reorganized and that it was essential to implement clear-cut PLM processes with system support. “The highest priority, however, is to construct a PLM landscape that will make the existing information and information flows more transparent. We have placed the focus on PLM and on integrating this approach throughout the company in order to create a shared data store for all our processes,” explains Dr. Dirk Hagen Winter, project manager Change Management in corporate management.

Before starting to look for a suitable PLM solution, Theegarten-Pactec commissioned the PLM experts to undertake an initial subproject with representatives from all the affected departments in order to set up an end-to-end information model. To do this, PROSTEP used a standardized method that makes it possible to identify redundancies, bottlenecks and discontinuities in the information flows. This showed that the main problem facing the company lies in making the comprehensive know-how that it has acquired over the years available and searchable quickly enough. Indeed, knowledge is often concentrated in individual employees and is not universally accessible.

“Together with PROSTEP, we also took a close look at how we get the information we receive from the customer when an order is placed in a well-structured manner in the order processing process,” says Winter. In principle, the aim is to structure the customer requirements functionally and to transfer the configuration with the desired options at least in part automatically into the mechatronic parts list and CAD structures. The idea is to manage the variant parts list in PLM in the future and then transfer the configured design parts list to an assembly-oriented production parts list and transfer it to the ERP system.

For historical reasons, the company’s product and module structure tended to be assembly-oriented in the past. As a result, the entire company is obliged to think assembly-oriented. The Engineering department does not develop end-to-end in a functional-oriented way, but instead develops the modules in the way they will subsequently be assembled. “Of course we still need an assembly-oriented BOM, but nowadays it really ought to be possible to derive it as a second mapping from a functional view.” As Röhm goes on to say: “PROSTEP has made it clear to us that our current approach wastes a lot of potential in development.”

In addition, it is currently very difficult for Theegarten-Pactec to track the lifecycle of its machines once they have left the factory. There is no time-based view of the shipped machines in the form of an “as-maintained” view of the digital twin. Such a view, however, is also difficult to maintain, since, for example, a food manufacturer with 100 machines in different development and delivery stages does not necessarily inform Theegarten-Pactec which spare part he has just ordered for which machine or which modifications he has made himself.

Concept for the PLM system development

In a second subproject with PROSTEP, employees from the various departments examined the question of what neutral formats could be used to provide information in the future. In this context, the topic of product manufacturing information (PMI) associated with CAD objects played just as much of a role as the derivation of simplified geometry models for creating electronic spare parts catalogs or project planning. “Our vision for the future is that all the information will be available in the 3D model, which is not the case at present,” says Röhm. With the exception of NC programming for mechanical machining and sheet metal working operations, which is performed on the basis of CAD models, the processes used for manufacturing and assembly are predominantly drawing-based. The tasks of deriving and preparing these drawings takes up a lot of the company’s design engineering capacity.

In a third subproject, which is due to be completed by the end of the year, a concept for the structure of the future PLM system and a requirements specification for the selection of the system will be drawn up. A key component of the development plan is a central integration platform that will act as an intermediate layer permitting the more flexible interconnection of the ERP, PLM and authoring systems. As Röhm explains: “At present, the direct connection between the PDM module and the ERP system means that we have to update the CAx systems whenever there is an ERP system release change and vice versa. We want to decouple these components by means of the integration layer in order, among other things, to make it easier to replace certain software modules.”

PROSTEP’s experts will also help Theegarten-Pactec select an appropriate system. Röhm is extremely happy with the way the PLM consulting and software company is planning and conducting the projects. “PROSTEP understands the path ahead very clearly. However, we don’t want to merely follow blindly but instead want to work on this task together.” Those involved know very well that it will take several years to implement the initiated changes and that systematic implementation of the PLM approach will demand a realignment of the currently employed ERP applications and the relevant processes.