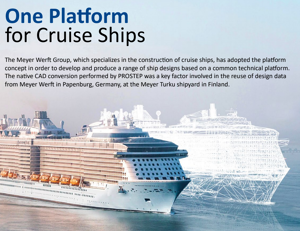 The Meyer Werft Group, which specializes in the construction of cruise ships, has adopted the platform concept in order to develop and produce a range of ship designs based on a common technical platform. The native CAD conversion performed by PROSTEP was a key factor involved in the reuse of design data from Meyer Werft in Papenburg, Germany, at the Meyer Turku shipyard in Finland.

In the automotive manufacturing industry, platforms have been used for decades to build outwardly different vehicle models with the aid of a common technical base, and therefore reduce development costs. Platform elements usually include non-visible components such as the base plate, side rails, parts of the running gear, brake system, tank, or exhaust system, and also allow the same engines and gears to be built into different models. In the case of cruise ships, platform elements are, in the first instance, a common hull structure of the same length and size for the part of the ship that is below the water level, with differently shaped bows and sterns for the purpose of preserving brand-specific silhouettes. The Meyer Werft Group concept also includes identical systems for propulsion, power generation, water treatment, and so on in its ship outfitting.

Carsten Lind, Head of the Structural Engineering Group in Papenburg, reports that this is the first time the Meyer Werft Group has used a common platform for various cruise ships. The project was initiated when a customer placed a major order for several ships for their different cruise lines. The platform concept promised to provide significant benefits to both sides. The shipping company wanted to standardize the functional areas of its various ships in order to be able to perform maintenance work more easily, and exchange technical personnel between its different ships, without losing the different brand styles perceived by its customers. The shipbuilding company’s idea was to use the common platform as a basis for distributing the workload between the shipyards in Papenburg and Turku more easily, and thereby avoid capacity bottlenecks.

Meyer Werft dealt with the technical feasibility of the platform concept, in close contact with the shipping company, and Meyer Turku looked into how their ships could be developed and built on the basis of the common platform. The Finns also contributed to the project in another way, by sharing their knowledge gained from their pioneering use of environmentally friendly LNG (Liquid Natural Gas) technology for the propulsion of passenger ships.

Challenges for the engineers in Turku

Both shipyards use different processes, methods and, tools for development and manufacturing. According to Henrik Mantere, Team Leader of Hull Design at Meyer Turku, this presented a major obstacle during the implementation of the platform concept. Though some of these differences are rooted in the company’s history, most are based on sound technical reasons. The ships are constructed in full length – from tank to observation deck – in the large open docks in Turku. Papenburg, on the other hand, has a roofed dock that can accommodate one complete ship plus a third of the next ship. Therefore, the first step in Papenburg involves building the floatable segments that are later assembled to form the complete length of the ship. The different assembly methods not only influence the size and structure of the modules but also the order in which they are developed.

To be able to reuse the blocks from Papenburg, the blocks have to be adapted to the block structure used in Turku, and must also be converted into another format. The problem is that both parties use different CAD systems. Meyer Werft is currently migrating to the new V6 CATIA version; however, the company still uses its proven CATIA V4 environment for basic and detail design in its current projects. The Finnish engineers, on the other hand, use the well-known AVEVA Marine system for the basic and detail design of hull structures, as well as the database-driven CADMATIC software for outfitting.

Pekka Puranen, who was the CAD Manager at Meyer Turku at the time, explains how the company evaluated various options, including the option of using a lowcost engineering service provider to remodel the models. Entrusting PROSTEP with the automated conversion of the native CAD data proved to be not only the more cost-effective solution, but also promised a much higher level of quality and reliability. Following the initial promising tests, Meyer Turku then engaged the PLM specialists to develop a dedicated interface for transferring data from CATIA to AVEVA Marine.

The aim was to use the converter initially to map the block structures from V4 to AVEVA. The users had to manually adapt the size and height of the individual blocks, however; PROSTEP provided some tools to allow the geometry to be split and fused more easily, and the blocks to be largely renamed automatically. Development Engineer Teemu Mäkinen explains that some 32 blocks with approximately 400,000 individual parts had to be converted in total.

In a second step, PROSTEP developed the functionality that was required to also transfer the detail design data from CATIA V4 to the AVEVA model. This enables an incremental refinement process in which smaller structural parts or openings for gas, diesel, electricity, and process and waste water supply lines can be added. The larger openings are defined early at the basic design stage (referred to as structural engineering at Meyer Werft) as they are important for strength calculations. Importing the outfitting openings into the AVEVA hull model saves a lot of time in detail design, and avoids errors that can occur when openings are placed manually.

As Mäkinen points out, more than 90 percent of the models are currently converted, and are used for basic design in Turku and for preparing classifications. He estimates that 40 to 50 percent of the converted data can be reused exactly as it is. Furthermore, the Finns use data from Papenburg as references for the development of areas that are specific to their ships so that they do not need to be completely redeveloped from scratch. Thanks to this reuse, considerable time savings of several months can be achieved for each module.

Converting the outfitting components from Catia V4 to CADMATIC was even more challenging than converting the ship’s hull. Given the different system philosophies of the two CAD systems, it was not possible to simply convert the CATIA geometry. Instead, the component IDs, their spatial position with start and end points, and so on, had to be extracted in order to map them to the corresponding component IDs in CADMATIC and recreate the model. Most of these components, such as engines, gas tanks, and so on, are only found once, but there are also standard components and so-called ‘used IDs’ such as flanges, pipes, or bends that appear thousands of times at different places in the ship. In the first of four conversion runs, which only involved the machine room, some 4,000 standard and 10,000 used IDs with more than 800,000 instances were converted/regenerated in CADMATIC. This represents slightly more than one third of the ship’s entire outfitting.

The conversion of the outfitting data was made more difficult at first by the fact that the material harmonization in Papenburg and Turku had not been concluded before the first conversion started. Because of this, it was not always possible to instantly determine whether a component was missing due to a conversion problem or because of the incomplete material harmonization. However, the quality of the results clearly improved after elimination of the duplicates that were detected in the first models. At the same time, the conversion helped to identify the components that are actually used in the new ships.

At present, it is difficult to quantify the precise time savings, as the conversion in the outfitting area has not yet finished. However, Puranen is certain that the benefits will be huge, in all aspects concerning the platform. Reuse not only saves engineering time, but also saves money in purchasing, as the two shipyards can jointly purchase a higher number of identical components.

The conversion of the ship’s hull also allows the employees in the Detail Design and Outfitting departments to begin their work earlier in the process plus start from a higher level of maturity and accuracy. This will in turn speed up the delivery of the ships. Furthermore, the conversion project has improved cooperation between the two shipyards as the colleagues in Papenburg and Turku have been able to develop a mutual understanding of one another’s different cultures and processes.