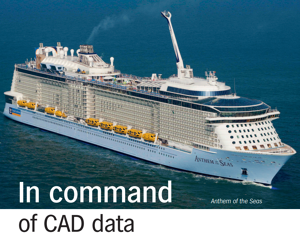 The construction of a cruise ship is an ambitious, largescale project, during the course of which hundreds of subcontractors have to be coordinated. To make the exchange of CAD data with partners easier and more secure, Meyer Werft introduced the web-based data exchange platform OpenDXM GlobalX and adapted it to the specific requirements of the shipbuilding industry with the help of PROSTEP.

Meyer Werft, which is headquartered in Papenburg on the Ems, Germany, has been building ships for more than 200 years. Over the last decades, it has acquired an excellent reputation for building special ships. These are not only cruise ships but also car and passenger ferries, research vessels, gas tankers and livestock carriers.The sister shipyard Neptun Werft in Rostock expands the range of ships built to include river cruise liners.A few months ago,MeyerWerft acquired the STX Finland shipyard,which specializes in cruise ships.With more than 3,100 employees, the venerable company, which is now in its seventh generation of family ownership, is the largest employer in the region.

The date of delivery of a cruise ship is set in stone and cannot be moved since the ship’s maiden voyage will have been fully booked years in advance.Anyone delivering late will run aground financially as the contractual penalties very quickly run into the millions.

When one considers that the assembly of a huge cruise ship like the Anthem of the Seas and the completion of its interior takes only a few months while at the same time the first third of the next ship is taking shape in the same dry dock, it is easy to image what kind of organizational tour de force is required. The Anthem of the Seas is one of the biggest cruise ships built to date in Germany — so big in fact that it had to make the journey down the Ems River from Papenburg to the North Sea backwards to ensure that it had enough water under its keel. The ship combines innovations such as a 90 m high observatory capsule and a panoramic bank of windows at the stern of the ship with state-ofthe-art environmental technology and improved energy efficiency. In April, it was officially handed over in Bremerhaven to the US American cruise line Royal Caribbean — of course right on schedule, as Jörg Hartmann,
Head of IT PLM at the shipyard points out.

The specific requirements of the shipbuilding industry and development cycles, which are short for complex products of this size, necessitate a high level of process automation, which places heavy demands on the PLM solutions used. As commonly used software packages only fulfill some of these requirements, shipyards traditionally use a large number of industry-specific applications and in-house tools.The PLM strategy pursued by MeyerWerft, however, is aimed at using standard tools when possible and, if necessary, adapting them to the requirements of the shipbuilding industry with the support of the software vendor. An initiative for replacing the more than 500 CAD,DMU andVR workstations with Enovia V6 is currently under way in cooperation with Dassault Systèmes (Vélizy-Villacoublay near Paris). But CatiaV4 is still the main system, in which the bulk of the CAD data to be exchanged is generated. In the past, two different processes were used to exchange data with external partners, depending on the type of exchange relationship involved. The specialist departments communicated with subcontractors who only needed data from time to time by means of FTP servers or simply via e-mail. In the case of partners whose data had to be synchronized on a daily basis, there was an automated process based on synchronization software developed in-house.Using the software was so complex and adaptation of the software when changes were made to the exchange processes was so time consuming that the engineers constantly required support from the IT department. “We were stretched to our limits and beyond with the old solution,” Mr Hartmann says adding: “We were no longer able to integrate new partners as otherwise the administrative overhead would have rocketed.”

As in the CAD environment,the shipyard decided to introduce a data exchange solution that was available on the market.A decision was made in favour of the OpenDXM GlobalX software from Darmstadt-headquartered PROSTEP AG which has been optimized for the secure exchange of large amounts of data.The software’s standard functions covered 80 percent of the requirements, and it was at the same time flexible enough to be adapted to the company’s specific requirements without excessive outlay.The standard version has been in operation for about a year and is used by several hundred users at the shipyard and subcontractors to interactively upload and download CAD files as well as other data and documents.

Automatic harmonization of the data

The specialists from PROSTEP have in the meantime extended the standard solution in the context of project development in such a way that it now supports the fully automated exchange of CAD data with large contractors.These large contractors may, however, actually be small engineering offices that assume responsibility for large orders within the framework of the ship development process at Meyer Werft and therefore need to constantly coordinate with the engineers at the shipyard. The data is normally synchronized once a day. The application used at Meyer Werft, aEDX (automated Engineering Data Exchange), supports incremental synchronization: “Following initial provision of the data packages, which together with the libraries can easily add up to several hundred megabytes, only the delta information needs to be exchanged,” explains CAD administratorWilhelm Düring.

While the standard version of OpenDXM GlobalX functioned without problem, the project team had to avoid several pitfalls during the development and implementation of aEDX.These were, to some extent, tied to the specific features of Catia V4 and use of the CAD system in the shipbuilding industry, as Jochen Bauch, the responsible project manager with PROSTEP, explains.MeyerWerft makes extensive CAD libraries available to its partners,the contents of which overlap to a certain extent, thus making it more difficult to update the data in the various fields of activity. Integrating the solution in the heterogeneous IT infrastructure of the exchange partners also posed a challenge. This challenge was however successfully mastered, thanks to the project team’s flexibility and close cooperation between all those involved. This allowed aEDX to go live in May 2014 following several months of trial operation.

Meyer Werft initially exchanged data daily with four development partners. Mr Hartmann estimates that approximately twenty partners will be exchanging data regularly with the system in its final configuration. Part of the data to be exchanged involves large Catia V4 directories containing hundreds of individual models, which are automatically collated and synchronized with the directories at the recipient’s end. Once a partner releases modified data packages at their end, the packages are transferred automatically to a special inbound folder at the shipyard and, after being checked, are uploaded to the development environment.The volume of data to be handled was underestimated when the specification was drafted, says Mr Bauch, which initially made life difficult for the integration specialists.But they also resolved this
problem.

It is no longer the employees in the IT department who define who receives what data but rather the key users in the specialist departments.They can set up the exchange relationships autonomously via the aEDX web portal and also monitor the status of the transfer jobs, which is recorded by aEDX. It used to be that they had to check with either the IT department or the exchange partners to make sure that the data had arrived safely. Today, the IT experts are only called in to help when the software reports an error. This has not only dramatically reduced the administrative overhead required for the data exchange process; users can also react much more flexibly to changes in the partner environment, and better account can be taken of the partners’ requirements, such as the maximum quantity of data exchanged: “After all, not everyone has heavy-duty data lines,” Mr Hartmann says.

The data exchange platform uses a special protocol that distributes the data in an HTTPS session over several channels (‘multithreading’) to minimize latencies when exchanging large data quantities over great distances. It is used during both interactive and automatic exchange processes and accelerates transfer by a factor of 2 to 3. If the connection should nevertheless fail,the algorithm ensures that the transfer is resumed at the point at which it was interrupted. At the same time, it allows the transfer to be stopped as required and resumed later.The data packages are listed in a queue, which enables users to decide which packages they want to send first.

OpenDXM GlobalX’s strengths include sophisticated security measures with multilevel data encryption. The security of the data is ensured by the fact that it is encrypted during transfer using a public key and is not decrypted using a private key until it has been downloaded by the authorized recipient. “Data security is an important issue at Meyer Werft, even if it is not yet firmly anchored in everyone’s consciousness,” Mr Hartmann stresses. That is why the security of the solution was tested using external penetration tests — with great success.To ensure that it can guarantee this level of security over the long term,PROSTEP has decided to have OpenDXM GlobalX checked for security gaps and certified accordingly

“The major benefit provided by PROSTEP’s data exchange platform is that we now have a uniform solution that we can use not only to exchange data automatically but also to upload and download data manually,” Mr Hartmann continues.”That not only makes life easier for us here in the IT department but also for users in the specialist departments, which has a positive impact on the acceptance level. We have increased the number of licenses within a very short period of time from the original 100 to 300.”

MeyerWerft will most likely continue to use PROSTEP’s data exchange platform even after the switch to Enovia V6, for which preparations are currently under way. The plan is to integrate it in such a way that the exchange of data can be initiated directly from the PLM solution and can also be confirmed there. An appropriate EnoviaV6 interface is already available.