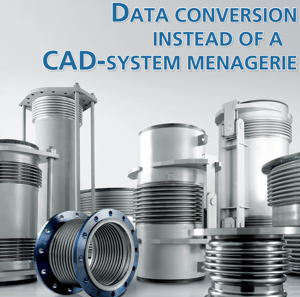 When Heinrich Witzenmann invented the flexible metal hose in 1885 and thereby laid the basis for the metal hose and expansion joints industry, the company to which he gave his name had already been running an ornamental goods factory for over 30 years. Nowadays, the long-established, Pforzheimbased company is the world‘s leading manufacturer of metal hoses, expansion joints, metal bellows and vehicle parts. These are used in the automotive industry and other industrial sectors, as well as in the field of technical building equipment, in order to decouple vibrations, compensate for expansions in pipework, permit flexible assembly, and transport media. In the last financial year, the company, which has a workforce of over 3,400 employees, achieved annual sales of approximately 480 million euros. Almost half of this turnover was secured in the Group‘s automotive business which Witzenmann has consistently expanded at the international level in recent years in order to strengthen its market position. Today the Group is represented by 23 companies in 18 countries around the globe. Witzenmann was one of the very first customers to make use of the data conversion service OpenDESC.com. Joachim Fleig, IT Manager for Engineering Applications, cannot state with certainty just how much money PROSTEP‘s data conversion service has saved Witzenmann over the last 15 years. However, the scope of these savings is easy to imagine given the number of different CAD systems that were used by automobile manufacturers at the time and the ways in which their system landscapes have changed since then. Today‘s automotive world is dominated by three CAD systems that are used in a variety of versions and configurations – in combination with underlying models that can differ from manufacturer to manufacturer and even from project to project.

As a tier 1 supplier whose products are used in almost every manufacturer‘s passenger and commercial vehicles, Witzenmann would have had to remain in phase with all the system and release changes installed by its customers. In other words, it would continuously have had to purchase and maintain the most recent software, train its users and provide the necessary support “A huge outlay in terms of cost and effort,” says Fleig,”which we have been able to avoid thanks to
OpenDESC.com.”

Products for automotive customers are mainly developed at the group‘s Pforzheim site. There are also two other development sites in Korea and the USA that concentrate primarily on adapting existing products to the requirements of their respective markets.

The designers have been working for more than 15 years with the Siemens PLM NX CAD/CAM system which, at the time of its introduction, was the best able to model the flexible structures of metal hoses and bellows thanks to the use of nonplanar space curves. The complex forming processes, which demand a very high level of expertise, are generally simulated using finite element analysis programs. This raises the question of why an automobile manufacturer might possibly need a native file for a metal hose or bellows with relatively straightforward interfaces which is used, for example, to decouple the vibrations caused by the engine and exhaust system. This might, in part, be due to the fact that the data is not only used for digital mock-ups but also in order to calculate how the hoses move when subject to vibration and how conflicts might occur. More important, however, is the issue of documentation, as Fleig explains: “During the early phase of development, the OEMs are usually satisfied with a STEP file. However, as we pass the various milestones, the more anxious they are to have the data as a tested model in their environments. In particular, the drawings must be accurate down to the last detail.” Despite this, the requirements vary from manufacturer to manufacturer and even from designer to designer. “For example, our French customers have been accepting STEP models and PDF drawings as the delivery format for years,” adds Fleig.

The OEM‘s data exchange requirements and the associated cost and effort were the main reasons why Witzenmann opted for OpenDESC.com, as Fleig goes on to explain: “Our automotive business has grown strongly since the late nineties and the volume of exchanged data has grown with it. Back then, we already had to supply 3D data in addition to our 2D drawings and had to decide whether or not to use the various systems employed by our customers. Given the large number of different systems, we chose a different strategy because the effort of maintaining such a heterogeneous CAD menagerie would have exceeded our human and financial resources. A comparison of the costs made it clear that we would be far better off with a conversion solution and a service provider who possessed the necessary expertise.”

Witzenmann uses the conversion solution in combination with PROSTEP‘s OpenDXM data exchange platform in which the profiles of all the Group‘s data exchange partners are stored, together with their associated requirements in terms of delivered data formats and quality credentials. As a result, the design engineers are able to commission conversion jobs themselves. In practice, this means that they can order the conversions directly. What is special about the solution implemented by Witzenmann is that the files are sent to the conversion service together with the customer‘s specifications and, following conversion, are returned together with an accompanying document that allows users to check their quality in the Autovue visualization software before they are automatically forwarded to the customer. No-one knows just what volume of data OpenDESC.com has converted for Witzenmann in the last 15 years. Jürgen Rausch, responsible for operational CAD data exchange in the IT department, estimates it as at least a few gigabytes. The fact that the design engineers regularly send fairly small volumes to “the desc”, as they call the conversion service, ensures the uniform utilization of the pipeline. The assemblies usually consist of six or seven components and represent an average data volume of ten megabytes. Between 15 and 20 jobs are processed every month – with the volume tending to diminish slightly, as Rausch explains: “The fact that we are making greater use of viewing programs means that we can cut down a little on our data conversion needs.”

Data Quality as a Competitive Advantage

Users are extremely happy with the quality of the converted data. This has been of a consistently high level for many years and has therefore contributed to the widespread acceptance of the solution. The ability to deliver high-quality data is an important competitive advantage for automotive industry suppliers since many OEMs immediately downgrade their suppliers if quality problems occur. But of course, the data quality does not depend solely on PROSTEP and the skills of the conversion experts, but also on the quality of the input.

“Of course, we do our utmost to deliver one hundred percent optimum data but sometimes subsequent corrections are necessary. However, the error quota is all but negligible. And if errors do occur then OpenDESC. com reacts quickly and straightforwardly,” says Fleig appreciatively.

The issue of data security does not pose any problems for Witzenmann in its use of the web-based conversion service. On the one hand, OpenDXM provides technical mechanisms and solutions to ensure secure data exchange while, on the other, a genuine trust based relationship has emerged between the two partners over the years. “Of course, some agreements have confidentiality clauses, but we have to be able to rely on one another,” stresses Fleig. Despite the benefits, the decision has regularly been called into question because the specialist departments have expressed their desire to work with the customer‘s CAD system as many of their competitors do. In the case of one important customer, at least, the question has resolved itself because the customer has decided to migrate from Catia to NX. “Unlike other automotive suppliers, we can be perfectly relaxed in the face of system changes – a fact that has naturally reassured us in our decision,“ confirms Fleig.

“We are freed from update cycles and license costs”

PLM IT Report: Besides the cost-related issues, were there other reasons for this decision?

Joachim Fleig: Naturally, cost-related issues were the core concern. However, we also considered the question of how we could produce and administer identical parts if we had to work with different systems. If you only have one system then it is a lot easier to reuse existing components in new projects. We adopt an extremely pragmatic approach here. This means that we look for a similar part in our ERP system, copy it and then create a new item which we modify as required. This enormously reduces the engineering effort for new projects.

PLM IT Report: What are the most important benefits of the data conversion service?

Fleig: First of all, we save on license costs because without OpenDESC.com we would need not only our NX workstations but also a number of Catia V5 licenses, and probably also Catia V4, Pro/Engineer and Inventor licenses. What is more, for each system, we would need an administrator and people able to work with it. The fact that we do not need in-house expertise in other CAD systems but can delegate that task to PROSTEP is a major benefit. At the same time, it makes us independent of our customers‘ update cycles. Of course, it helps us that our customers do not request any parametric models from us, with the result that the conversion simultaneously allows us to optimize the protection of our know-how.

PLM IT Report: If you had to, would you choose the data conversion solution again today?

Fleig: Definitely, because it is a decision that has proved worthwhile year after year. Whether that has made us a model for other suppliers, I can‘t say, but I would imagine that it has.

PLM IT Report: Will you actually need the data conversion service for customers that use NX? After all, they have the same CAD system as you.

Fleig: Our customers‘ NX systems are configured differently from our own. We will therefore continue to convert the data via OpenDESC.com so that we can deliver it in the required quality.

PLM IT Report: And what about the strategy of customers that will accept JT data for certain processes in the future?

Fleig: In principle, this strategy suits us. However, you are mistaken if you think that this is a standard format – it has very strong customer-specific and Catia V5-specific aspects. And that brings us back to the subject of conversion. The way things look at the moment, we will still need the help of OpenDESC.com.