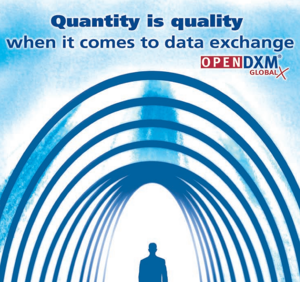 Thanks to encryption and Digital Rights Management (DRM), the secure exchange of sensitive data over the web is no longer a problem. The challenge lies in shifting even large mountains of data quickly and reliably between the respective exchange partners. The exchange of bulk data calls for special protocols and mechanisms, such as those provided by PROSTEP’s web-based data exchange portal OpenDXM GlobalX.

It is not just recently that data has been exchanged in bulk, and tried-and-tested tools such as the OpenDXM software, which support users in organizing their data exchange processes, have long been available. The demands made of such tools have, however, increased in line with the rise in data volumes, frequency of exchange processes, number of exchange partners, dynamics of partner relationships and variety of exchange scenarios. Nowadays data is exchanged on a massive scale not only by manufacturers and suppliers in the automotive and aviation industries, but also by companies in all sectors of manufacturing industry – and beyond. Their exchange partners are scattered around the globe and may change from one project to the next. As a result, high priority has been accorded to topics such as data security and the safeguarding of intellectual property.

In order to cope with the increasing demands of global data exchange, PROSTEP AG has developed the web-based platform OpenDXM GlobalX, which can be operated both as an independent solution or as an add-on to existing OpenDXM and OpenPDM applications. This secure, stable and user-friendly platform for the asynchronous exchange of bulk data via the web is to be further developed into a collaboration platform with project management functions and a project space for online collaboration, depending on customer requirements, according to Udo Hering, the responsible project manager at PROSTEP.

OpenDXM GlobalX satisfies all the basic requirements of data exchange in the global age: the platform is fast, secure and reliable. It also provides the required tools for automation of both data provision and the downloading and further processing of data in the corporate systems. What’s more, it can be implemented fairly quickly at relatively little cost and effort, as long as the company in question boasts a suitable IT infrastructure. Unlike the OpenDXM Global Edition, which has also supported the provision of data via the internet to date, the new data exchange platform is installed on a web server in what is known as the demilitarized zone (DMZ), which means that is located outside the intranet but separated from the World Wide Web by its own firewall.

During uploading to the platform, the data is saved in encrypted form in a web folder structure which can only be accessed by authorized recipients, thus guaranteeing data security. Recipients have to log into the system with their user ID and password and must also possess the keys required to open the data once it has been downloaded. Documents intended for more than one recipient either have to be uploaded several times, or a group space has to be created to which all group members are provided with access via a superordinate key.

OpenDXM GlobalX uses a Public Key Infrastructure with one public and one private key to assign digital signatures and encrypt data. The private key is installed on the user’s computer automatically when he first signs in. Thanks to the corresponding interfaces, the customer can continue to use his existing infrastructure to authenticate users and manage keys. The data is encrypted with up to 2,048 bits, depending on the security requirements of the company in question. Since the encryption of large volumes of data can be detrimental to performance, PROSTEP uses a twostage encryption concept, comprising synchronous encryption for the user data, which is fast but not highly secure, and extremely secure, asynchronous encryption to protect the data keys.

The data exchange portal also boasts Digital Rights Management (DRM) functions that enable time limits to the placed on the downloading of certain documents. The document management and provision options are to be supplemented in the forthcoming release by a Publish & Subscribe mechanism to enable documents to be published and automatic versions provided for large groups of users: “It will then be possible to block or archive changed documents in such a way that they remain visible while no longer being able to be downloaded, and to provide all subscribers with the latest versions automatically,” says Hering of the new function, which will be particularly useful in the preparation of requests for quotation, design guidelines and CAD libraries.

Optimized for large volumes of data

Given the vast quantities of data and the numerous exchange processes handled by many companies on a daily basis, users cannot be expected either to upload their data to the portal or to download incoming data manually. This calls for the use of specific mechanisms. OpenDXM GlobalX offers personalized “agents” that connect to the portal at particular times determined by the user and upload the respective outgoing data to or download incoming data from the web spaces in question. The next development stage involves what are known as “robots”, via which companies can automate data export and import for a larger number of users.

The speed of bulk data exchange depends not only on the available network bandwidths, but also on the latency times over lengthy transmission distances. In cases where distances are long and data packets numerous, such latency times can result in considerable delays, thus impairing throughput. PROSTEP has developed a special protocol with a view to minimizing these times. It transmits the data in multi-threaded mode, thus distributing data transmission between several channels, in the course of a single HTTPS session. This protocol can be used both in interactive mode and in batch operation. As a result, bulk data can be transmitted to OpenDXM GlobalX or downloaded from the web-based data exchange platform over long distances two to three times as fast as before.

In cases where the connection is lost despite all efforts to minimize the latency times, the algorithm ensures that data transmission is resumed where it left off. It also enables data transfer to be stopped at will and continued on a later occasion. The data packets are listed in a queue, allowing the user to decide which should be sent first. “Our customers from the automotive industry have long requested this feature,” says Udo Hering.

Independent or as an add-on

Uninterrupted transmission ensures reliable data exchange. The reliability of the platform itself is assured by the option of operating it in a failsafe server cluster. Records of who has uploaded or downloaded what data and when are kept via appropriate logging functions, so that they can be traced at any time. If companies use the data exchange portal in conjunction with an existing OpenDXM application or the PDM integration platform OpenPDM, the OpenDXM GlobalX gateway forwards these messages to the back-end systems. This is where users can locate all the relevant information on their exchange processes, allowing automated further processing to take place in the internal network.

Existing customers receive the interface to OpenDXM GlobalX free of charge and can use the new data exchange platform as an add-on to their current installation, with a view to connecting their overseas or Asian suppliers who do not use OFTP, to name just one example. The portal solution is configured via the existing OpenDXM database, allowing customers to continue to use their existing exchange processes and profiles. With the help of Java portlets, OpenDXM GlobalX can also be integrated as an application in existing supplier portals, where it uses the available authentication mechanisms.

The data exchange portal has been designed as an independent solution as far as architecture is concerned. It is no trouble to implement and is easy to operate. PROSTEP offers an affordable entry-level solution to small and medium-sized enterprises which have not used any data exchange tools to date. This solution is based on a cost-neutral database and uses tried and-tested shareware as a web application server. It comprises a basic package with all the data exchange functions, supplemented by packages with sufficient web spaces and user accounts. “This also makes OpenDXM GlobalX attractive to customers from outside the automotive and aviation industries who wish to put their data exchange with suppliers on a secure and sustainable footing,” says Udo Hering. Such customers include those in the mechanical engineering and plant construction, process, medical technology, consumer goods and electronics industries.