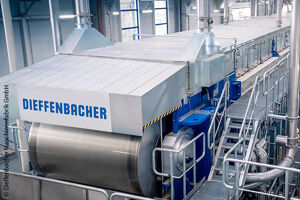 Dieffenbacher needs to replace its existing PLM system because the vendor will be discontinuing support in the foreseeable future. Instead of immediately starting to look for an alternative, the plant engineering company first analyzed the PLM capabilities it would actually need in the future with PROSTEP’s help. Thanks to PROSTEP’s capability-based consulting approach, the company can be sure of moving in the right direction.

The Dieffenbacher Group manufactures presses and complete plants for producing wood-based panels, forming metal and composites, and recycling waste wood. The strongest sector in terms of sales of the family-run company, which was founded in 1873 and today employs over 1,600 people worldwide, is providing plants for the production of wood-based panels. Dieffenbacher is the global leader in this sector together with a German competitor. The three business divisions, Wood-Based Panels, Forming and Recycling, generate annual revenues of 400 to 450 million euros. The company’s customers include not only global manufacturers of wood-based panels and large furniture manufacturers but also, for example, carmakers.

Product development and manufacturing have a decentralized organizational structure. Core products such as presses for wood-based panel production and forming presses are developed and manufactured at the headquarters in Eppingen. The subsidiary in Bielefeld is responsible for developing machines for shredding logs; the site in Leverkusen develops, among other things, huge drums for drying wood chips, and the Finnish subsidiary develops finishing components such as grinding lines and stacking systems. Production takes place in Germany, the Czech Republic, China and Canada, and at external suppliers.

The wood processing plants are customized to a great extent, depending on how wide and thick the wood panels are to be, what materials the customer wants to process, and how many cubic meters they want to produce per day. To reduce the engineering effort involved, the company has developed a modular system that allows certain components to be configured on an order-by-order basis. The complete absence of engineering is, however, very rare. Efficient engineering design is important when it comes to shortening project lead times, which can be 12 to 14 months from the time an order is received to the production of the first panel.

Numerous components and systems from suppliers are incorporated in the production systems. As general contractor, Dieffenbacher assumes responsibility for planning the entire plant, which in the case of wood-based panel plants, for example, can measure the size of several football fields, as Matthias Rebel, Head of Technical Information Systems, explains. In addition, the service department is responsible for modernizing existing plants and offers customers innovative services such as the IoT platform EVORIS, which they can use to monitor the quality of their production and perform predictive maintenance. This service is sometimes a crucial factor in the context of awarding of contracts.

Requirements relating to the PLM system

“The products services that we offer are very important to us. They require that we represent the as-maintained state – whether this will be done in the PLM system or the ERP system has not yet been decided,” says Rebel. Plants have long lifecycles of 20 years or more and are subject to change throughout their lifetimes. Thomas Schmetzer, CAD/PLM administrator and head of the PLM project, adds that mapping the electrical and electronic components in the product structure also poses a major challenge. “We have to document the complete product structure – not only that of our own machines but also those of bought-in system components – in a way that ensures that it can be traced over the entire lifecycle.”

One of the results of the consulting project with PROSTEP is that Dieffenbacher should no longer design its plants within a predominantly assembly-oriented framework, but rather in a function-oriented manner. As Schmetzer explains, “An assembly-oriented approach to work has a considerable downside, especially in the context of a modular concept, as it increases the complexity and variance of our modular system. If you were to differentiate by function instead, variance would be much smaller and the modular system more manageable.”

However, a prerequisite for function-oriented design is that the PLM system not only makes it possible to map functional structures but also to transfer them to assembly or service BOMs. Making changes to structures in two systems and ensuring that they remain synchronized is much more difficult.

It also requires a rethinking of the organization, as someone has to remodel the structures in the PLM system. This would normally be the task performed the people in work preparation who are more at home in the ERP system.

Uniform solution for all locations

The implementation of a product structure concept, including a functional view, on the basis of a uniform information model is one of four action areas that the project team has identified as a top priority within the framework of the PLM Quo Vadis project. The fact that system vendor Oracle will no longer provide support for the PLM system Agile e6 as of 2027 and is unable to offer its customer a persuasive migration solution set this project in motion. “This is why we, like many Agile users, now have to look around for a new system,” says Rebel.

Dieffenbacher has been using the Agile software, which was originally developed by Eigner, as a PLM solution for many years, although not at all locations. The Finnish subsidiary uses PTC Windchill to manage its CAD files for historical reasons. The aim, however, is a single PLM solution for all the locations, if only to make it easier to connect the system to the ERP world, which is also in the midst of upheaval. SAP R/3 will be replaced by SAP S/4 HANA in the next few years. “If we don’t decide on Windchill as the PLM system, persuading our Finnish colleagues of the benefits of the new solution will certainly be a challenge,” says Schmetzer.

Dieffenbacher did not want to face the difficult task of selecting a system alone, instead it preferred to seek the help of a partner who has a better overview of the PLM market and is not tied to a specific vendor. “We looked at a number of different consulting companies and chose PROSTEP based on their references and many years of experience. It was the perfect choice,” says Rebel. The project team is enthusiastic about the professionalism and experience with which the external consultants have guided the preparations for selecting a system.

Analysis of the required PLM capabilities

The first phase of the project involved determining the current situation and defining the target state, i.e. the PLM capabilities required in the future. In a number of workshops, the project team analyzed, together with people from every specialist department from design, purchasing and sales through to production, assembly and service, where the problems lay and what requirements the new PLM system needed to meet. “The aim was not to identify ready-made solutions but to see where we need to make improvements,” says Rebel.

The consultants from PROSTEP used a standardized process to analyze where Dieffenbacher stands compared to other plant engineering companies and combined the results with the “pain points”. The result is a heat map identifying the areas where action needs to be taken. These are currently being examined in more detail in the second phase of the project. First and foremost is the creation of central process owners so that global processes like change management can be optimized. The idea is to set up an end-to-end change process together with the process managers in the specialist departments so that changes are easier to trace.

The new project organization is at the same time a prerequisite for implementing the topic involving the product structure and information model mentioned earlier. Multi-BOM management will play an important role in this context. Other important action areas are end-to-end product documentation and the integration of suppliers in the product development process.

It is intended that the second phase of the project be completed by the end of the year so that the project team can create the requirements specification and configure the corresponding template at the beginning of next year together with PROSTEP. The findings from the previous project phases will serve as requirements. According to Rebel, the requirements specification will then be sent to five or six system vendors with the aim of carrying out a benchmark with a maximum of three vendors. The objective, however, is not to test hundreds of individual functions but only the most important criteria such as multi-language capability or the ability to move from a functional structure to a production and service structure.

“Sitting together around a table and formulating the use cases was very instructive for everyone and enhanced the sense of community,” says Schmetzer. As Rebel points out, “We firmly believe that we are moving in the right direction with PROSTEP.” The fact that a clear objective has been identified and a better understanding of the company’s strengths and weaknesses has been achieved is one of the greatest benefits of the consulting. “The capability-based approach is very practice oriented. We didn’t build castles in the air; instead we specified the issues that will be relevant to us going forward.”