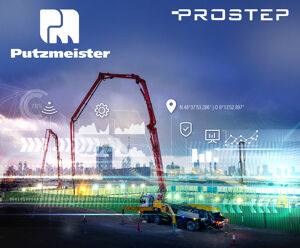 Darmstadt, March 2022 – The Putzmeister group of companies has consolidated the CAD and PLM landscape of its French subsidiary PLM2 and integrated it into the group-wide environment support from PROSTEP. The PLM experts at PROSTEP converted the French subsidiary’s Pro/ENGINEER Wildfire data, including the design history, into the NX format and migrated it to the PLM system Teamcenter, which is used throughout the group. This enables Putzmeister to eliminate the additional cost of maintaining two system environments and makes it easier to reuse components.

Putzmeister is one of the world’s leading manufacturers of concrete pumps, shotcrete machines, batching plants, truck mixers, mortar machines, conveyor belts and industrial pumps. The group, which has been part of Chinese construction machinery manufacturer Sany since 2012, has also grown in recent years by acquiring smaller competitors such as the company PLM2 in France. Putzmeister decided to replace the CAD and PLM systems used by its French subsidiary and migrate its data to the group-wide environment with the aim of making it easier for the subsidiary in France to collaborate with other subsidiaries in the group.

Putzmeister used the services provided by the PLM experts in PROSTEP’s OpenDESC team to convert and migrate the CAD data. They were the only ones with the appropriate tools and the know-how needed to implement the project in the tight timeframe of three months, as Helmut Kockelke, project manager at Putzmeister, points out: “Without PROSTEP, we wouldn’t have been able to complete the migration project on time and on budget and ensure that the migrated data had a high level of quality. “

“Without PROSTEP, we wouldn’t have been able to complete the migration project on time and on budget and ensure that the migrated data had a high level of quality. “

In addition to the correct mapping of the drawing views, one of the challenges posed by the migration project was the conversion of features. In the new environment, the users wanted to link intelligent CAD models and assemblies using knowledge about relations and have associative drawings so that they could be reused optimally. To convert the features, PROSTEP integrated the CADfeature software from its technology partner ELYSIUM in the conversion pipeline. The PLM experts also developed a postprocessor for Putzmeister that adapted the assembly structures to the group-wide standard following conversion and distributed the elements of the components over the defined layers in NX.

After a successful test run, PROSTEP converted a total of approximately 7,000 CAD models and drawings with a very high success rate. All the files were transferred with the exception of three or four models. Standard routines for PLM migration and integration provided by PROSTEP’s proven OpenPDM platform also made it possible to quickly and easily import all the converted data into Teamcenter.

Thanks to its time-tested tools and high level of expertise, PROSTEP was able to adhere to the tight schedule and complete the project on time. This allowed Putzmeister to take the existing CAD and PLM systems in France out of service. This not only allows the company to save costs for licenses and system administration but also standardizes the product development methods toolbox. This makes it easier to exchange existing components and facilitates collaboration throughout the group.

PROSTEP AG is recognized as a partner to the leading manufacturing companies worldwide. We count the top companies in this industry among our customers. PROSTEP is an independent consulting and solution development company, but also supplies ready-made product solutions. Our strength lies in a combination of industry-specific expertise, process know-how and technological competence. We offer our customers competent consultancy services, a comprehensive range of other services, and innovative solutions covering every aspect of product lifecycle management.

The PROSTEP Group has a current headcount of more than 280 in Germany, Poland and the USA. In addition to its headquarters in Darmstadt, PROSTEP also maintains branch offices in Berlin, Hamburg, Hanover, Cologne, Munich, Saarbrücken, Sindelfingen, Stuttgart and Wolfsburg, as well as in Wrocław (Poland) and in Troy, Michigan (USA).

All press releases can be downloaded on our website: prostep.com/en/press