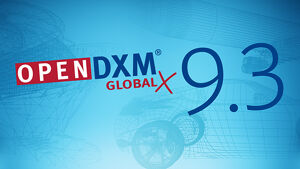 PROSTEP began delivering the new version 9.3 of OpenDXM GlobalX to maintenance customers via the GlobalX portal at the end of November. The data exchange platform’s graphical web interface, which has been very well received by users, now also includes all system administration functions. What is new for users is that they can now create their own serial reports in the new web interface.

OpenDXM GlobalX’s web-based user interface is a success story in which system administrators can now fully participate. With version 9.3, the task of moving all administration functions to the new web interface has been brought to a successful close. As part of this move, we have expanded the functions and grouped them together in topic-specific panels. The newly created system monitoring dashboard makes it possible for administrators to see at a glance the status of system components, critical processing operations and which licenses are free and which are currently being used.

Depending on the permissions they have been granted, they also receive information about the user configurations, the files in the system, the e-mails that have been sent or the processing and approval processes. They can view information about logged events, files and changes to the database, evaluate it according to specific KPIs and display it graphically in charts.

The web interface also offers users attractive new features. They can easily generate and manage frequently used serial reports themselves. The popular function for time-controlled creation of customized reports from table views is available to them via the filter function.

OpenDXM GlobalX provides numerous integrations to backend systems that allow export and import processes to be automated. We have also improved the security mechanisms by integrating two-factor authentication (2FA). It is based on the time-based one-time password (TOTP) algorithm and allows access to OpenDXM GlobalX to be made even more secure via a soft token generated by an authentication app.