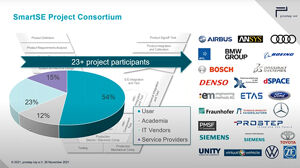 The SmartSE project of the prostep ivip association goes into the next round. Time for an interim review. In a web seminar, the project partners, including PROSTEP, provided an overview of the activities currently underway and those planned for the future. One of the showcases demonstrated how simulation tasks and results can be exchanged in a traceable way across several partners and tools.

The SmartSE project is one of the oldest and most successful projects of the prostep ivip association. For nine years now, the project partners have been addressing the question of what processes, formats, and tools are needed to enable the collaborative development and validation of complex products in a multi-stage supply chain. For example, they have evaluated the FMI standard (Functional Mock-Up Interface) for the exchange of simulation models, established a reference process for the exchange of these models, which is now also used in the joint project SET Level to validate autonomous driving functions, and defined Building Blocks for simulation-based decision-making.

Before the project enters Phase V, the project partners wanted to present their work results to date. Using showcases, they demonstrated the prototypical implementation of collaborative system development using existing standards or standards under development. In addition to the FMI standard for the exchange of simulation models, these include the SSP (System Structure & Parameterization) standard, which serves as a container for the exchange of simulation packages. In addition to the simulation tasks and models, these packages also contain information about the simulation process, i.e. the individual process steps and associated resources. They are described in the XML-based STMD format (Simulation Task Meta Data).

In one of the showcases, representatives from PROSTEP, Dassault Systèmes, eXXcellent solutions and PMSF IT Consulting demonstrated how these standards can be used to exchange simulation tasks and models between development partners with heterogeneous system environments.

The core element of the showcase was the “Credible Simulation Process” established by the partners, which ensures traceability from the requirements to the simulation result to the evaluation and simulation-based decision-making during the exchange.

The partners defined the simulation task in TRACY, the traceability solution developed by PROSTEP, and then handed it over to eXXcellent’s orchideo easySSP, Dassault’s Dymola and PMSF’s FMI Workbench for its implementation and execution. The tool chain is not atypical for collaborative simulation processes. However, the solution also works with other tools as long as they support the appropriate exchange formats.

After the simulation was completed, the packages were loaded back into the traceability solution so that the results could be checked and documented in a traceable manner. During the showcase, PROSTEP also demonstrated the possibility of using the solution to perform impact analyses and, for example, to examine which simulation models were used in which simulations. This is helpful in assessing the impact of model errors on other projects.

The project partners have ambitious plans for SmartSE’s anniversary year. In Phase V, they want to build on the results to date to investigate whether the simulation chain also works when working with multiple suppliers and subcontractors. They want to find out how the systems engineering approach can be combined with agile approaches. In one of the five work packages, they will also investigate how models with different levels of abstraction can be simulated with each other.