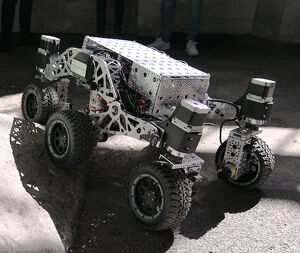 PROSTEP first presented the Mars Rover as a demonstrator of its wide range of software and services at its 25th anniversary celebration. Since then, for example, the chassis and housing of the vehicle originally designed by NASA have been further developed and the physical Mars Rover has been linked to the digital Mars Rover in order to map use cases like the digital thread.

New PLM technologies and concepts such as the digital thread, traceability, model-based systems engineering (MBSE) and the digital twin can be very abstract. With the aim of making them easier to experience at events, PROSTEP has built several models of the Mars Rover based on NASA’s design documents. The argument in favor of the all-terrain vehicle was the fact that it is a complex mechatronic product and as such is ideal for demonstrating new technologies and methods. The model can be used universally and, because it is “rocket science”, it can be presented to the media and the public particularly effectively.

The Mars Rovers were used for the first time at PROSTEP’s 25th anniversary celebration in early 2019, and they subsequently also caused quite a stir at the Hanover trade fair (HMI), the prostep ivip Symposium, the IoT Solutions World Congress held in Barcelona and other events. The coronavirus pandemic has only interrupted their career as a major public attraction. We intend to be back on tour with the new generation of Mars Rovers by the first half of 2022 at the latest.

We have used this forced break for a major “pit stop” and have equipped the Mars Rovers with more powerful steering and drive motors. In two student projects, the rocker bogie was optimized using a hybrid (plastic/sheet metal) construction and plastic components manufactured using additive manufacturing processes. This has made the physical model of the Mars Rovers much more robust, which means that it now requires less maintenance after being used. A positive side effect is that the new Mars Rover variant can be used to demonstrate the PLM capabilities of variant management.

A chassis dynamometer has also been implemented in recent months to ensure that the vehicle can be used in an even more flexible manner in the future. This is because not all trade fairs offer a sufficiently large driving space. The test bed makes it possible to implement and present application cases in real-life driving conditions even on small exhibition stands.

The physical model, however, only constitutes one half of the demonstrator. Equally important is the digital twin – or different twins – which requires end-to-end data management in the context of the digital thread. We use a commercial PLM solution in conjunction with an IoT platform for this purpose. The platform is where the operational data from the Mars Rovers is collected, and it was also used to develop the dashboard for visualizing the data. Our integration platform OpenPDM can be used to combine other enterprise applications with each via in order to map the different use cases for the Mars Rover.

The geometry, the product structure together with the variants, and the associated requirements are managed in the PLM solution. This means that they are not only connected to the components but can also, for example, be linked to the operational data from the physical model on the IoT platform. If, for example, the temperature of the vehicle exceeds the threshold specified in the requirements, an alarm is triggered via the dashboard. The digital thread makes it possible to navigate from the requirement that has not been met directly to the components in the eBOM that are involved, thus allowing a decision to be made regarding where action needs to be taken.

The digital thread to the eBOM and the ability to trace the operational data to the eBOM is one of the new use cases mapped in the PLM solution. The Mars Rover data is also used to demonstrate how our new OpenCLM solution works in the context of generating digital threads. It is intended that automated/autonomous driving be further developed through the use of artificial intelligence algorithms with the aim of creating another future use case.