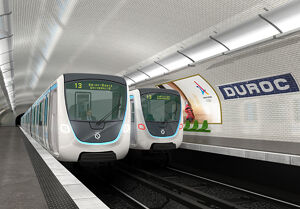 A few weeks ago, Alstom completed the takeover of Bombardier’s railway division. However, the two companies already worked closely together beforehand on the development and production of the new generation of metros for the Paris transport authority. The former Bombardier sites use the OpenPDM integration platform to import the engineering data for production and assembly into their PLM environment.

Under the project name MF 19, the Paris Metro is getting a new generation of rail vehicles for the lines operated with steel wheels. The contract between the operating companies and the now “married” consortium partners Alstom and Bombardier Transportation provides for the delivery of 44 trains worth 530 million euros to be put into service between 2024 and 2026 – with the option of a further 410 trains. Alstom will essentially supply engines, drive chains, on-board electronics and IT security systems, while the former Bombardier site in Crespin, France, will be responsible for the design and production of car bodies, bogies, air conditioning and interior components.

Through the acquisition of Bombardier Transportation, the French Alstom Group expands its global footprint and becomes a world leader in mobility solutions, present in 70 countries, employing around 75,000 people and generating pro forma combined revenues of around €15.7 billion. At the same time, the acquisition expands Alstom’s portfolio of innovative rail technology products and solutions. The portfolio ranges from light and regional trains to high-speed trains and also includes new strategic products such as people movers and monorails. With a fleet of 150,000 rail vehicles, the company has the world’s largest installed base, which is also the foundation for expanding its leadership in the service business. In the signaling segment, it now ranks second in terms of sales.

Alstom and Bombardier have a long history of joint consortium projects. “Due to the often very large project volume, such projects are nothing unusual in rail vehicle construction,” says Edouard Hundemer, who is responsible for the OpenPDM project and end-to-end integration of MF19 engineering tools at former BT in the Bombardier Information Systems division. “However, a special feature of the MF 19 project is that both partners must be able to build the complete trains. They therefore need all the information and documentation required for assembly, even if not everyone manufactures all the subsystems.” In this way, the clients want to ensure faster delivery of the new metro generation.

Collaboration is a major challenge in the consortium project, and the merger of the two companies did not automatically resolve it because the IT landscapes have not yet been consolidated. “Basically, each partner wants to use its existing IT systems and methods for design and engineering, if possible, to avoid the cost of acquiring new systems and retraining its engineers,” says Hundemer. “At the same time, however, both partners must ensure the PLM paradigm of single source of truth when collaborating.”

To simplify collaboration, a separate development environment was set up for the MF 19 project at Bombardier’s Crespin site, which in a sense replicates the system and process landscape at Alstom. This makes it easier for the developers of the two consortium partners to synchronize their engineering data, which is particularly helpful in the early development phase with its large number of changes. For the new colleagues at Bombardier, however, it means that they must subsequently integrate the data into their own PLM landscape in order to maintain collaboration with suppliers and to be able to supply the downstream processes in manufacturing and assembly with construction documents.

The PLM landscape at the former Bombardier sites is relatively uniform, with two or three main systems. As the central PLM system, the “Rolling Stock” division uses the Siemens Teamcenter Enterprise (TCE) software, which is gradually being replaced by Teamcenter UA. Enovia 3Dcom, a CAD-related data management system, is also used to manage the CAD models. The mechanical assemblies are normally designed with the CAD system Catia V5 from Dassault Systèmes, which is also used at Alstom.

The data import into TCE or Enovia 3Dcom is controlled via PROSTEP’s PLM integration platform OpenPDM, which the new group division already used for the joint development of the ICE4 with Siemens. “We had good experience with the software during the ICX project and thus knew that it would work well on our side,” says Hundemer. “In addition, we could be sure that we met the EN standards in terms of verification requirements.”

“We had good experience with the software during the ICX project and thus knew that it would work well on our side. In addition, we could be sure that we met the EN standards in terms of verification requirements.”

The requirements in the ICX project for Siemens, however, differed significantly from those in the MF 19 project. In the former, OpenPDM supported both the export and import of CAD data and product structures in the ongoing development process, with the Catia files being converted into the neutral STEP format to protect intellectual property. OpenPDM also controlled the reconversion of incoming STEP files from Siemens into Catia format during import. However, in this case the company did not need the complete construction documents, as it only acts as a supplier of certain components. The trains are built by Siemens.

In the MF 19 project, the engineering data from the common development environment is to be integrated into the PLM world of the former Bombardier locations when a certain level of maturity is reached, in order to be able to use it for subsequent processes. For this purpose, they are provided in a coordinated format that OpenPDM can read. The PROSTEP solution imports the CAD and PLM data and maps them to the global data model of former Bombardier, which is quite different from the Alstom data model of the development environment. Part of the metadata moves together with the CAD files into the CAD-related data management, while the other part is created in TCE or updated after changes.

Data is imported at the push of a button

In principle, the import and mapping of data can be fully automated with OpenPDM. However, the former Bombardier team opted for a semi-automated approach in order to avoid having to immediately update every small change in the development in TCE or Enovia 3Dcom. PROSTEP has enhanced the solution so that it continuously compares the version statuses and informs the key users of changes. They can import new data sets or parts of them at the push of a button. OpenPDM also offers the possibility of importing files that have not yet been released, e.g. from long-running components, so that they can be used for request for quotations, for example.

One of the biggest challenges in the OpenPDM project was the mapping of the different data structures, as Hundemer points out. With the help of PROSTEP, however, they were able to overcome these challenges without any problems. Hundemer is very satisfied with the support he received from the collaboration experts: “It is always good to have a partner who understands his product in depth and knows how to implement it at the customer’s site. The people from PROSTEP were always approachable and often the ones who had the solution ready. This made the ramp-up much easier.”

“It is always good to have a partner who understands his product in depth and knows how to implement it at the customer’s site. The people from PROSTEP were always approachable and often the ones who had the solution ready. This made the ramp-up much easier.”

Although – as is usual for large companies – a large number of stakeholders and external service providers was involved in the project, whose coordination was also made more difficult by the Corona pandemic, the implementation and testing of the new integration solution, including going live, only took a good six months. The project partners were of course able to build on the experience and preliminary work from the ICX project. The software did not have to be installed from scratch either, because the French locations simply access the existing instance in one of the company’s data centers.

The aim is to provide the departments with a uniform solution for collaboration in joint ventures and consortium projects, as Hundemer concludes. “In the Information Systems department, we have developed a strategy for integrating partners and suppliers into the extended company, in which OpenPDM plays an important role. We will therefore certainly continue to work with PROSTEP.” Possibly, the solution will even be expanded so that in addition to CAD and PLM data, requirements can also be exchanged via OpenPDM in the future.