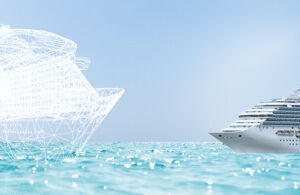 The MEYER Group is capable of supporting most of the drawing management related processes with ENOVIA’s standard functionalities. This is the most important finding of a comprehensive proof of concept (PoC) that PROSTEP’s shipbuilding experts carried out for the shipyard. MEYER intends to reduce the time and effort required for customization and updates by using a more standardized PLM solution.

The MEYER Group is one of the leading manufacturers of cruise ships with shipyard locations in Papenburg, Rostock and Turku, Finland. The shipyards use different IT systems for the generation and management of shipbuilding information, which are to be more closely harmonized in future. In Papenburg and Rostock, for example, an AS/400-based mainframe application is still in use for drawing management together with two ENOVIA versions adapted to selected process steps. The applications are highly customized and are gradually running out of maintenance, which is why MEYER wants to replace them with an OOTB (out-of-the-box) solution that can be used throughout the company if possible. The idea of emulating the existing mainframe functionality one-to-one in the new environment was rejected as too costly and not target-oriented.

OOTB in this context means that there is no need to program customizations in a software beyond configurations already provided by the manufacturer in the platform to provide the required features and functions. However, it does not mean that customer-specific adaptations are no longer possible. The advantage for users is that they can use all the necessary features virtually out of the box, while IT can more easily upgrade installed applications to new versions. However, users must accept that the solution may not optimally support all shipbuilding-specific processes they are used to or that modifications to the processes may be necessary.

Therefore, the core question was whether and to what extent the functionality of the OOTB Dassault solution is suitable for the shipbuilding process requirements of the MEYER shipyard. To find out, the company commissioned PROSTEP’s experts to carry out a PoC. As general contractor, they contributed their project management experience and their knowledge of MEYER’s customer-specific processes to the project, while PROSTEP’s partner CENIT provided the necessary ENOVIA expertise. The two companies worked together very efficiently at the PoC over a period of several months, even though shipbuilding was uncharted territory for CENIT employees.

Together with the users at MEYER, the project team analyzed the processes in the legacy systems and defined the use cases to be supported by ENOVIA and the 3DEXPERIENCE platform from scratch. Some of these processes contain automatisms specially tailored to the ship topology. Then the team checked if the processes described can be mapped to the OOTB solution in principle, which standard objects and functions are required for this, how the use of the standard functions affects the processes, and at which points gaps may arise between the previous and the new way of working. The main functions that were considered were project management with milestones and tasks, document management with version management, classification, and the ability to distribute documents to specific people for release.

This methodical procedure met with great acceptance among users. It turned out that they can handle most of the tasks in drawing management with the standard functions. What is missing out-of-the-box is the automatic assignment of ENOVIA objects to the ship topology, i.e. to the block in which the user in question is currently working. There are also a few gaps in the connection to the planning system for the ship development process, which must be closed by developing an interface. In addition, the Excel import must be extended in order to import the drawing lists with thousands of drawings per project into the new environment.

At some points in the process, users will have to change their way of working to be able to use ENOVIA largely OOTB. For example, the software manages drawings or metadata differently than the legacy system, in which they are stored as one object together with planning data such as milestones, deadlines, etc. The project team therefore made the decision to separate the planning aspects from the drawing management and to use the project management functions from the ENOVIA standard. One of the advantages of this separation is that tasks can be defined independently of the drawing, and 3D models and other project-relevant documents can be assigned to the planning data in future. In other areas, the project team was able to provide additional functions from the standard, for example for the ship- or project-specific classification of certain documents as a working standard. This was not possible in this form before.

The focus of the project was expanded several times, so that the project, which was originally designed to last three to four months, ended up taking almost a whole year. As part of the extensions, the project team was commissioned to test the suitability of the OOTB solution also for drawing management at the Turku site, where other IT systems are in use. The PLM experts at PROSTEP concluded that the OOTB solution was basically suitable for this purpose, but recommended prioritizing harmonization for easier implementation.

Following the successful completion of the PoC, MEYER began preparing the implementation in Papenburg. “ENOVIA OOTB is a very important and forward-looking topic for the entire MEYER Group”, says Executive Board Member and Head of Design at MEYER WERFT Malte Poelmann. “Enabling digital and cross-location collaboration within the group in a maintainable PLM platform was the motivation for this project. The consultants from PROSTEP and its partner CENIT made a decisive contribution to the success of the project with their industry and PLM expertise”.