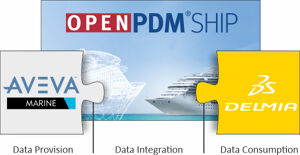 Finnish shipyard MEYER Turku, part of MEYER Group and one of the world’s leading builder of cruise ships, ferries and special ships, plans for the future of shipbuilding. In a Proof of Concept (PoC) led by PROSTEP, and in cooperation with TECHNIA the shipyard examined the advantages of model-based, visually supported work planning using DELMIA software in the production process.

MEYER Turku’s aim is to optimize planning and control in production and thus to reduce the production time of individual ships. This requires a restructuring of the historically grown IT landscape, which is strongly adapted to the shipyard’s specific needs. The Finnish engineers use the shipbuilding specific CAD system AVEVA Marine for basic and detailed design of the steel structures (Hull). For work planning and control, production-relevant data is then transferred to NESTIX, a MES tool perfectly adapted to the existing production processes. The software however cannot directly use 3D design models, which makes data consistency difficult and impedes visual work planning.

When looking for a future planning software for manufacturing, the project managers in Finland did not need to look far afield: DELMIA is part of Dassault Systèmes 3DEXPERIENCE already in use as a PLM platform at the sister shipyards in Papenburg and Rostock. In view of the ongoing harmonization of the IT landscapes at the different shipyard locations, the idea of a practical test of the Dassault software in Turku was therefore obvious.

Another obvious choice was to cooperate with PROSTEP’s shipbuilding experts, who have been supporting MEYER for years as system-neutral consultants in the integration of its CAx and PLM landscapes. They took the lead in the project team that was to carry out the evaluation of DELMIA’s Out Of The Box (OOTB) functions from a user perspective. With a view to later productive use, the aim was to clarify whether DELMIA could provide all the necessary functions, how much customizing would be required and how the software could support closer integration of hull and outfitting design in the future.

As part of the PoC, PROSTEP’s experts developed a concept for converting and transferring the geometry and metadata from AVEVA Marine to 3DEXPERIENCE and coordinated the activities of Dassault partner TECHNIA, which was responsible for testing the DELMIA software and introducing users to the new, integrative way of working.

“The cooperation between PROSTEP, TECHNIA and the users at MEYER Turku was very targeted and worked perfectly. We were able to carry out the project in time and budget and achieved all expected results”

During the implementation of the project, the two consulting firms combined their core competencies. The experts from TECHNIA contributed their industrial best practices in applying DELMIA, while PROSTEP brought in its experience with shipbuilding processes, PLM as well as agile project management. In addition, PROSTEP also developed the integration to provide AVEVA Marine 3D model data in DELMIA for testing purposes. The company benefited from years of close cooperation with the Finnish shipyard and the proven in-house integration platform OpenPDM SHIP, whose functions were used to implement the integration.

TECHNIA’s experts tested DELMIA together with the work planners at the shipyard so that they could gain practical experience with the model-based approach. It was found that visual work allows them to control the progress of the work much better. In principle, the PoC was able to map the defined use cases with DELMIA OOTB. For productive use, however, the software would have to be customized in order to fulfil all essential requirements of the Finnish shipyard. For example, an automatic time calculation for the planned work is missing as basis for the resource and capacity planning. “If we achieve a similarly high degree of automation with DELMIA, we will need much less time for work planning due to the integrative approach”, concluded Pekka Puranen.