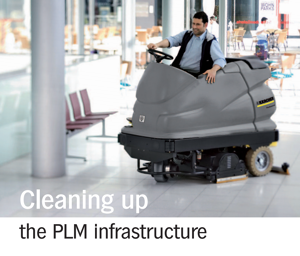 PLM projects that are driven by Engineering sometimes lose sight of the strategic dimension of product lifecycle management. But Kärcher realized in good time that although unifying the CAD system environment is a necessary condition for improving integration of the engineering processes, it is not, on its own, sufficient. Discussions with the different departments at the various locations revealed that clear-cut requirements management, uniform change management and end-to-end project management are equally important aspects. “When we discovered this, we stopped the CAD selection project and asked PROSTEP to help us find the right PLM strategy,” states Matthias Steinmann, Central R&D Services Manager at Kärcher, talking to a member of the editorial team.

The global growth of the company involved the acquisition of a large number of companies, which led to a heterogeneous IT system environment. Although most CAD users develop their products using Catia V5, a total of seven different CAD systems are used across the company. A further obstacle to collaboration across the different locations is the lack of a central data backbone for Engineering. In Winnenden, where the company is headquartered, the CAD data is managed with SAP PLM. In the USA, PTC Creo is used and linked to the PLM system Windchill but with no connection to SAP. And at many other locations, file-based management systems are still used for the CAD data.

Kärcher has employees in 100 companies worldwide, including Germany, Italy, Romania, China, the USA, Mexico and Brazil. To allow multiple locations to collaborate when developing new products, the company aims to establish product platforms and set up competence centers for specific technologies. According to Steinmann, this is not possible with the system environment as it stands: “Engineering operations have to become far more closely knit if we want to use the same components everywhere.”

Initially, Kärcher simply wanted to open up its large-scale CATIA installation in Winnenden to other locations. But the idea ran into licensing restrictions and would have required considerable additional investment, and so the company investigated the alternative of CAD systems from other vendors. Benchmark tests showed that Kärcher’s products could in principle be developed using any of the systems under consideration. But the tests also revealed that the heterogeneous, fragmented PLM environment was a far more significant problem when it came to the joint use and exchange of the CAD data. “We remain committed to the idea of a uniform CAD system, but we have realized that, whatever system we opt for, PLM offers us far greater leverage in the product engineering process and can even help us migrate the CAD data,” says Steinmann.

Kärcher entrusted Darmstadt-headquartered PROSTEP AG with drawing up the new PLM strategy and specifying the system requirements because vendor-neutral consulting was seen as being extremely important. Or, as Steinmann puts it: “We had already been in touch with an American consulting company but decided to use PROSTEP because of their closer physical proximity. We would not have managed to handle the project without PROSTEP’s consulting services.”

“We had already been in touch with an American consulting company but decided to use PROSTEP because of their closer physical proximity. We would not have managed to handle the project without PROSTEP’s consulting services.”

As a first step in the project, the consultants analyzed the existing system and process environments from the perspective of the collaboration requirements and the envisaged efficiency gains. The aim was to identify which was the better option for a uniform PLM solution across the entire group: direct linking via SAP PLM or a dual-vendor strategy with separate PLM and ERP systems. The analysis revealed that the processes at Kärcher are well defined, but that they are not put into practice consistently throughout the company. End-to-end change and maturity management is a fundamental prerequisite for collaboration across locations and has to be implemented. Changes during the course of the projects are not sufficiently transparent. BOM management is not homogeneous and there is also no strategy for handling BOMs in the concept phase. The integrated SAP and PLM system environments also require considerable manual intervention.

On evaluating the findings, the consultants came to the conclusion that separate ERP and PLM systems were a more appropriate solution for the various national subsidiaries and for collaboration across different locations than direct linking via SAP PLM. One of the reasons for this is that the process requirements of the various product divisions are extremely varied. Kärcher not only makes mass-produced goods that are produced to order or ordered from stock. They also manufacture custom equipment and variants, which means that it is also necessary to support configure-to-order and engineer-to-order processes. According to Steinmann, it would require considerable effort to map this level of complexity in SAP PLM.

The second step in the project was for the consultants to work together with the departments to specify requirements governing the choice of PLM system. These were incorporated into the requirements specification and an evaluation matrix was drawn up. Kärcher had taken a fundamental decision not to go with a neutral PLM system. In other words, the decision which PLM system to use entailed a preliminary decision regarding the CAD system to be used throughout the company. Nevertheless, since the migration process will stretch over a significant period, support for multi-CAD environments is an important criterion that has to be met by the PLM system.

“One important insight from the assessments was the desire expressed by all departments, including those that were not involved with engineering, to implement transparent change management that was capable of clearly representing changes to the requirements made during the course of the project. And so we expanded the scope of the project to cover application lifecycle management (ALM) in order to ensure that the issue of change management was also addressed,” explains Steinmann. Requirements management is of particular relevance to electronic engineering and software engineering, which are becoming increasingly prominent at Kärcher, as most of today’s products contain mechatronic components. But it is envisaged that all device requirements be integrated.

The consultants from PROSTEP analyzed Kärcher’s product portfolio, which has grown enormously and become far more diverse over the past few years. The variant and configuration strategies of the different product divisions vary considerably. This demands an extremely flexible PLM solution that has to support different processes and bill of materials (BOM) concepts. “According to our strategy, the eBOMs will be created in the PLM system,” says Steinmann and adds: “And we and PROSTEP are currently considering whether we should also derive the plant-neutral mBOMs directly in the PLM system and then condition them for the specific plants.” One thing is certain: there will be separate engineering and manufacturing BOMs in order to allow flexible control over their introduction into the manufacturing operation.

A uniform change process across the entire group is crucial for collaboration across different locations, as Steinmann explains: “We want to know when each change was incorporated in production and what units have the changed component fitted so that service staff can make use of this information.” Details of how the change process will be organized with regard to interaction between the PLM system and the ERP system have not yet been finalized, but it is probable that the two systems will communicate changes to each other depending on the maturity of the product. This requires a powerful, bidirectional interface.

The importance of project management when selecting the PLM system is still an open issue that will be examined separately. The reason for this is that a different organizational unit is responsible for project management and the project team do not wish to preempt any decisions taken there. “But, together with the consultants from PROSTEP, we have already developed a concept showing how we can use PLM to provide optimum support for our new product engineering process, what tasks need to be completed at a given level of maturity and what work packages result from this,” explains Steinmann. Ideally, these tasks should be mapped in the PLM system in order to be able to monitor their progress more effectively.

The decision as to which system to use is due to be made by the middle of the year. And then things will start to get really exciting. The company is fully aware that the implementation of a PLM system is a change project that will run for several years, as Steinmann points out: “This means that we need an open, scalable solution that can grow with us, as we cannot roll out everything at once.” PROSTEP will advise and support Kärcher during the introduction phase and will monitor whether the objectives of the project have been achieved.

The name Kärcher is synonymous with top performance in the world of cleaning, and not just in the professional sector. The foundation for the success of the family-owned company with headquarters in Winnenden was laid by Swabian inventor Alfred Kärcher in 1950, when he developed the world’s first hot-water high-pressure cleaner. The introduction of the first portable high-pressure cleaner heralded the breakthrough into the domestic appliance market, a market that is today served by a wide range of products for cleaning floors, windows and facades and for watering the garden – naturally all in the familiar Kärcher yellow. In the field of professional cleaning, the company offers not only its anthracite-colored high-pressure cleaner but also floor scrubbers and scrubber dryers, sweepers and vacuum sweepers, snow throwers, water treatment and recycling systems and complete vehicle cleaning systems.

Alongside international expansion, a strategy that the company has followed systematically since the 1970s, innovation is the most important driver of growth for the company. This is no longer restricted to the products themselves but also encompasses digital services such as a fleet management system for facilities cleaning services and a smartphone app for operating the automatic watering unit in the garden.
www.kaercher.com