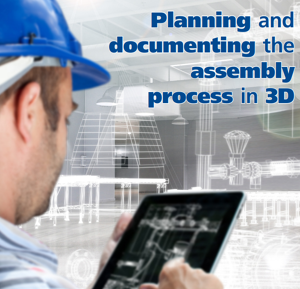 Companies want to be able to start assembly planning earlier and calculate the assembly costs more reliably. The people responsible also want to reduce the time and effort needed to create the assembly documentation through the intelligent reuse of the 3D models from the engineering department and improve the quality of the documentation – also with the aim of minimizing the risk of errors during assembly. And they want to be able to update the documentation faster and with less effort when changes are made to the system. In principle, 3D design allows the 3D models of the individual components to be assembled step-by-step using a computer and the sequence of the assembly operations to thus be specified. However, when it comes to large systems comprising thousands of components, performance problems can quickly arise, which is why the engineers usually only perform assembly at the level of individual assemblies or modules. In addition, companies would also need additional CAD workstations for assembly planning, which are relatively expensive to buy and maintain. One recommended clever alternative is therefore to use a lightweight format, which ideally can even be animated to make the assembly operations easy to understand.

All Common CAD Formats Can be Read

PROSTEP’s solution for 3D assembly planning is based on the company’s own 3D PDF technology, which is able to convert 3D models from all common CAD systems into the tessellated PRC format, making it more than 90 percent “lighter” than the original models. 3D PDF documents and the embedded models can be viewed using the normal, free Adobe Reader, which is installed on practically every computer. Another major advantage is that the 3D models can easily be combined within the document with 2D information such as detailed views and drawings. The 3D PDF is very similar to conventional assembly documentation, aside from the fact that it can be made available both electronically and printed on paper. The documentation can be compiled to a great extent automatically with the help of the server solution PDF Generator 3D and appropriate templates.

Interactive Animation of the Assembly Steps

Companies can use the 3D PDF based solution for assembly planning to plan assembly operations digitally based the CAD models. A large library of typical assembly operations makes the planners’ work easier and allows the assembly costs to be calculated reliably. Company-specific values such as cost rates, duration, etc. can be stored for the operations and enable assembly to be planned with an accurate timeframe and budget. The library can easily be expanded to include customer-specific operations.

A key strength of the PROSTEP solution is the ability to animate the 3D models of specific assemblies and components irrespective of the CAD system used to create them, in other words after they have been imported into the 3D PDF document, thus making certain assembly steps easier to understand. The basis for this is provided by the 3D PDF Pro plug-in for Adobe Acrobat Pro, which now allows more accurate navigation in the structure tree and searches for specific component attributes. The search tool makes it easier to handle large assemblies in the 3D animations. 3D PDF Pro also makes the creation and updating of 3D PDF documents faster by automatically linking descriptive fields and buttons in the templates with the latest 3D contents. When viewing the embedded 3D geometry, Adobe Reader, like any commercial 3D viewer, allows you to rotate and tilt the models, zoom in on them, and also take certain measurements. The functional scope of Adobe Reader can be limited when the 3D PDF documents are created in order, for example, to protect a company’s intellectual property when the documentation is passed on to outside companies. It is even possible to use the optional PDF Generator 3D Rights Management module to restrict access to the documentation to certain people or impose a time limit, and also to revoke access rights previously granted.

The 3D PDF solution from PROSTEP can very easily be integrated into an existing IT infrastructure in order, for example, to incorporate additional information from the PLM system or transfer information such as the assembly costs to the ERP system. This significantly reduces the amount of manual work required to create assembly documentation. Furthermore, the documentation can be updated pretty much at the touch of a button after changes have been made.

Combined with the option of incorporating animated image sequences in the 3D PDF documents, 3D visualization makes it easier for the technicians to understand the designs and ensures that they made fewer errors. The digitalization of assembly planning allows this activity to be performed at an earlier phase, which helps shorten delivery times.