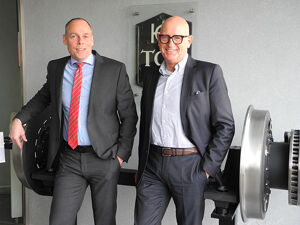 Finding the right PDM system is a challenge for companies with limited IT resources and with no expertise in the field of PDM. This is why Oberhausen-based GHH-Radsatz GmbH, which is part of the GHH-BONATRANS Group, brought in the PLM consultants from PROSTEP. They not only supported the company in defining the requirements and selecting the system, but also accompanied the pilot implementation.

Wheelsets have been made in Oberhausen for more than 200 years, although Gutehoffnungshütte Radsatz GmbH was only founded in 1994. Since 2014, the company has been part of the GHH-BONATRANS Group. With its global workforce of 1,700 and sales of over 300 million euros, the group is Europe’s largest manufacturer of wheelsets for all types of rail vehicles. In addition to its two development and production sites in Oberhausen and Bohumín in the Czech Republic, GHH-BONATRANS has a further production site in India and a sales office in Hong Kong.

The 280 employees at the Oberhausen plant primarily develop, manufacture and sell light-rail applications with rubber-sprung resilient wheels for trams around the world, but also wheelsets for heavy-rail applications ranging from underground and metro to high-speed trains and railway construction equipment. The staff at the Czech sister company BONATRANS are responsible for developing and producing wheelsets with solid wheels for conventional trains, high-speed trains, locomotives and freight cars. Their own hot forming facilities also allow them to supply forged parts for wheels and shafts, which are machined in Oberhausen and fitted in the wheelsets.

Every year, GHH-Radsatz supplies around 6,000 wheelsets and 40,000 wheels to rail vehicle manufacturers such as Alstom, Bombardier, Stadler, Skoda and Siemens as well as to rail operators. According to Dr. Sven Jenne, Director of Engineering and Research & Development in Oberhausen, Germany, around half of the business is in the aftermarket segment, since wheels are wearing parts. “There is an extremely large range of variants. This is because wheels and wheelsets have to be tailored to each vehicle project and adapted to the infrastructure. This is also our strength, because otherwise we would not be able to assert ourselves in the highly competitive market against competitors from Eastern Europe and increasingly also from China.”

Compared to solid wheels, the amount of engineering effort needed to adapt the rubber-sprung tram wheels is greater, as their design is more complex. A V-shaped rubber ring between the wheel body and the tire ensures greater ride comfort. Design engineers must therefore always achieve a balance between strength, cushioning and mountability of the wheels. And Jenne explains that the V-shaped cushioning is unique to GHH-Radsatz. “Our GHH® V60 is the most widely used rubber-sprung resilient wheel in Europe.”

Every year, the company handles many concurrent projects, each of which can last between six and 24 months. The aim is to improve punctual delivery by detecting discrepancies in good time. Design engineers are under great time pressure, especially for new vehicle projects, as the time between order placement and delivery is becoming ever shorter, while delivery times for long-running items such as the forged parts are often beyond their control.

At the same time, the complexity of the projects and the amount of documentation needed are growing. Jenne: “Wheelsets are safety-relevant components, and the requirements with regard to traceability and also the volume of documents for each project and order have increased significantly in recent years.” The documents must be kept for 30 years or more because wheelsets have very long lifecycles and are constantly being reordered.

The file-based archive system made it increasingly difficult for users and company managers to keep track of the status of projects and, in the case of aftermarket projects, to trace which documents were actually valid. “Our staff spends a lot of time hunting down and collating information. That’s why we want to make it accessible to all those involved, regardless of the archive systems used in the individual departments, and in the process firm up the ‘memory’ of the company,” says Jenne, explaining the purpose of the PDM project.

In consultation with its Czech sister company, GHH-Radsatz decided to replace the archive system with a database-driven product data management system. When they embarked on the search for a suitable solution, however, it soon became apparent that the company was not in a position to get a clear picture of the multitude of solutions on offer and to assess their capabilities.

Jenne: “At times, we had the impression that we were using a sledgehammer to crack a nut, as we initially only needed part of the functionality offered by PDM.” That’s why PROSTEP was called in as a vendor-independent helper. The company’s PLM consultants not only know the systems and the vendors, but also bring along a wealth of experience from other selection projects.

As a first step, PROSTEP supported the project team in completing the requirements, structuring them clearly and creating a proper requirements specification. One of the most important requirements was the interaction with the Infor Smart Office M3 ERP system, which is currently critical for the creation of articles and BOMs and for order processing, and is intended to remain so. It was also important for the PDM system to offer a good interface to the SolidWorks design system, which is used in Oberhausen on 18 CAD workstations, and it should also be possible to connect it to the CAQ solution. In addition to the system’s integration capabilities, GHH-Radsatz also attaches great importance to simple system administration and the ability to further develop it in-house without the need for programming.

Even though the first priority is to connect the existing systems and make information more readily available, the company has more far-reaching plans that PROSTEP also took into consideration when selecting the system. For example, the engineering change process, which is currently still entirely paper-based, is to be mapped to an electronic workflow. Jenne would also like to see greater digitalization of the entire order flow from the request for quotation, through design, material procurement and production, right up to dispatch and invoicing. This would be done by parallelizing certain tasks by something akin to PDM-driven project management. It would also help management to monitor the status of the projects and respond to discrepancies more rapidly.

In a professional selection process with transparent parameters, PROSTEP initially selected five candidates from a total of ten potential vendors. These were then invited to submit an offer. After the offers had been evaluated and discussions had taken place with the vendors, three candidates were shortlisted and were given the opportunity to demonstrate their programs on the basis of the use cases engineering change and order processing. This methodical approach to system selection ensured that the results were comparable. “We were always able to explain to management how we came to our decision,” explains Jenne.

Ultimately, the choice fell on the PRO.FILE software from PROCAD, although Jenne stresses that all three suppliers made a very good impression. The decisive factor was not only better value for money in terms of the costs of purchasing, rolling out and maintaining the software, but also the ease of configuration. “I was very impressed with how easily my colleagues were able to program, or rather configure, some wonderful things. This gives me confidence that we will easily be able to extend the solution in the future.”

The consulting service paid off

GHH-Radsatz spent about 10 to 15 percent of its total budget (excluding internal expenses) on consulting. According to Jenne, this was a wise investment because the company is confident that it has taken a decision that is sustainable in the long term. He would particularly recommend external consulting to smaller companies that are less familiar with PDM. “Thanks to the collaboration with PROSTEP, the vendors immediately realized that we knew what we were talking about. And I have the feeling that the consultants’ knowledge of the market also had a positive impact on the price negotiations.”

The company will begin rolling out the system this March. Rollout will be based on an existing prototype that PROCAD set up last year and which essentially maps all the planned functions including change management and order workflow. However, implementation of the latter is not planned until next year in order not to overburden users. The plan is to initially enable CAD data and document management with read access to ERP and CAQ systems. Before this can happen, however, large amounts of existing data from the various file archive structures will have to be migrated. Jenne explains: “We have already held a large number of workshops with PROCAD and PROSTEP on this aspect.”

In the long term, he expects the use of PDM to bring considerable benefits. Users will be more productive because they will spend less time searching for information. Processes will be accelerated by working in parallel, which will reduce throughput times. In addition, the status of projects will become more transparent, so that management can intervene more rapidly in the event of delays.