Software is controlling ever more critical functions in vehicles. In order to ensure integrity, carmakers and automotive suppliers are demanding the highest level of security when exchanging software code. At the same time, they need to be able to integrate new partners in the exchange processes flexibly. This is why Valeo Siemens eAutomotive is using PROSTEP's secure data exchange solution OpenDXM GlobalX as a service from the cloud.

There are up to100 million lines of software code in a modern car, and trends such as e-mobility and autonomous driving are ensuring that this will rise still further. Software doesn't just control the performance of combustion engines; in hybrid and electric vehicles, it also ensures that electric motors, voltage transformers, charging units, etc. all work in perfect harmony and also delivers efficient power management. Unlike combustion engines, electric motors need software to compensate for fluctuations in performance, for example as a result of variation in the ambient temperature, and thus maximize the vehicle's range.

The drive systems for electric vehicles are not off-the-shelf products that can simply be fitted in any vehicle. Rather, they always have to be tailored to the vehicle they are intended for. This is done to a large extent via the software. For this reason, during the early phases of development, the developers constantly have to provide the OEMs with new versions of the compiled source code, which is then flashed onto the control units, tested and debugged. The test results that come back from the OEMs reveal to the developers which parameters are not yet working properly, and they modify the code accordingly. This is an extremely high-tempo process, according to Martin Wichert, Application Engineer PLM in the Information Services unit at Valeo Siemens eAutomotive.

Valeo Siemens eAutomotive was founded in 2016 and is a joint venture between Valeo and Siemens. It manufactures high-voltage components and systems for hybrid and electric cars of all major OEMs. Siemens brought its many years of experience in motor and converter technology to the new company, while Valeo contributed, among other things, its charging technology, inverter systems, converters, etc. and, above all, its automotive expertise as one of the world's biggest automotive suppliers. The joint venture is headquartered in Erlangen and has R&D centers in France, Germany, Norway and China. It also has production facilities in Germany, China, Poland and Hungary. Valeo Siemens eAutomotive currently has a workforce of more than 1,000 and is looking to take on more staff to cope with the explosive growth in the market. The order volume quadrupled in the past year and currently stands at a value of 10 billion euros.

Simultaneously coping with growth and the need to harmonize the heterogeneous IT system landscapes in the two companies is one of the challenges faced by the joint venture. The former Siemens locations generally still use the Siemens PLM systems, while Valeo is dominated by Dassault Systèmes products. Wichert explains that the aim is to establish, within the framework of the Valeo infrastructure, an independent system landscape with Teamcenter as the PLM system for the development of mechanical components and electrical/electronic components, coupled with Polarion as the application lifecycle management (ALM) system for controlling software development.

But establishing a common IT infrastructure takes time. And time is something that the software developers didn't have, as they essentially had to be capable of exchanging data with OEMs and suppliers from the word go. And so Valeo Siemens eAutomotive was one of the first customers to make use of PROSTEP's new software as a service (SaaS) offering. The data exchange solution was a compelling choice, thanks to the many reference customers throughout the automotive industry and the fact that Valeo has been using OpenDXM GlobalX for some time now, albeit on-site and primarily for exchanging CAD data.

"Fast deployment was the decisive reason for selecting the SaaS solution, but only under absolutely secure conditions, of course", says Wichert. "After all, the carmakers' security requirements are becoming stricter with each passing year. Even in the form of compiled binary files, safety-critical software can only be exchanged with end-to-end encryption using public and private key mechanisms in order to guarantee its integrity and exclude any possibility of manipulation. The exchanged files must have an expiry date, and access must be closed down after a certain period of time."

OpenDXM GlobalX meets the very highest security standards, and this is regularly confirmed in penetration tests. But running the solution within the SaaS model was, of course, something entirely new for PROSTEP, as was the use case itself. The data exchange solution was originally conceived to offer secure exchange of large volumes of CAD data as found in mechanical engineering. By contrast, Valeo Siemens eAutomotive needs to rapidly exchange small data packets with an extremely high frequency since software is subject to constant change until it is finally locked down and released. Wichert estimates that hundreds of files are exchanged every day.

Wichert freely admits that it was somewhat of a gamble to be one of the first customers to use the SaaS model: "But PROSTEP solved everything extremely well. We drew up and tested the concept together. The SaaS solution worked straight away and is stable in operation. To date, the system has not been down once. It gives us an efficient, secure, platform-independent and user-friendly way of exchanging data with partners who have ever more stringent security requirements." One crucial factor that promotes acceptance of the solution and helps it to become rooted in day-to-day activities is the user-friendliness of the web application. Even users who are not as tech-savvy when it comes to new technology as the software developers were able to use it with virtually no formal training.

To improve usability still further, Valeo Siemens eAutomotive wants to roll out the integration of OpenDXM GlobalX into Windows Explorer across the entire company. This makes it possible to simply drag and drop objects in the Windows folder structure to perform data exchange operations with the required level of security. This integration has already been deployed successfully on a few machines, but a few adjustments still have to be made to the security settings before rollout. The roadmap also includes direct integration of the platform in the respective backend systems.

From the company's perspective, the advantage of the SaaS solution is that Valeo Siemens eAutomotive is able to use it without any installation overhead. The IT department did not need to procure, install or test new hardware and software. Instead, they only had to expand the data lines and set up the relevant access rules in the firewalls. "Installing a server-based, on-site solution, integrating it in the existing IT infrastructure and training the users would have taken time and would undoubtedly have cost four times as much," says Wichert. "Furthermore, we can scale up very quickly when we need to integrate more exchange partners, and the costs are known in advance."

In fact, the original 200 users that had been planned rose to 400 within a year. This includes more than 200 external users from OEMs and suppliers, for example development partners in India who develop certain software components for Valeo Siemens eAutomotive. PROSTEP has generated a variety of templates that allow new users to be activated quickly and securely, covering the various security levels right up to end-to-end encryption. According to Wichert, it takes less than five minutes to set up a new account.

Wichert sums up saying, "We regard OpenDXM GlobalX as a core application for secure data exchange with users who cannot access our ALM and PLM systems directly. It is a sustainable platform that meets the growing security requirements of the OEMs and opens up the opportunity for us to automate our data exchange process still further in future." 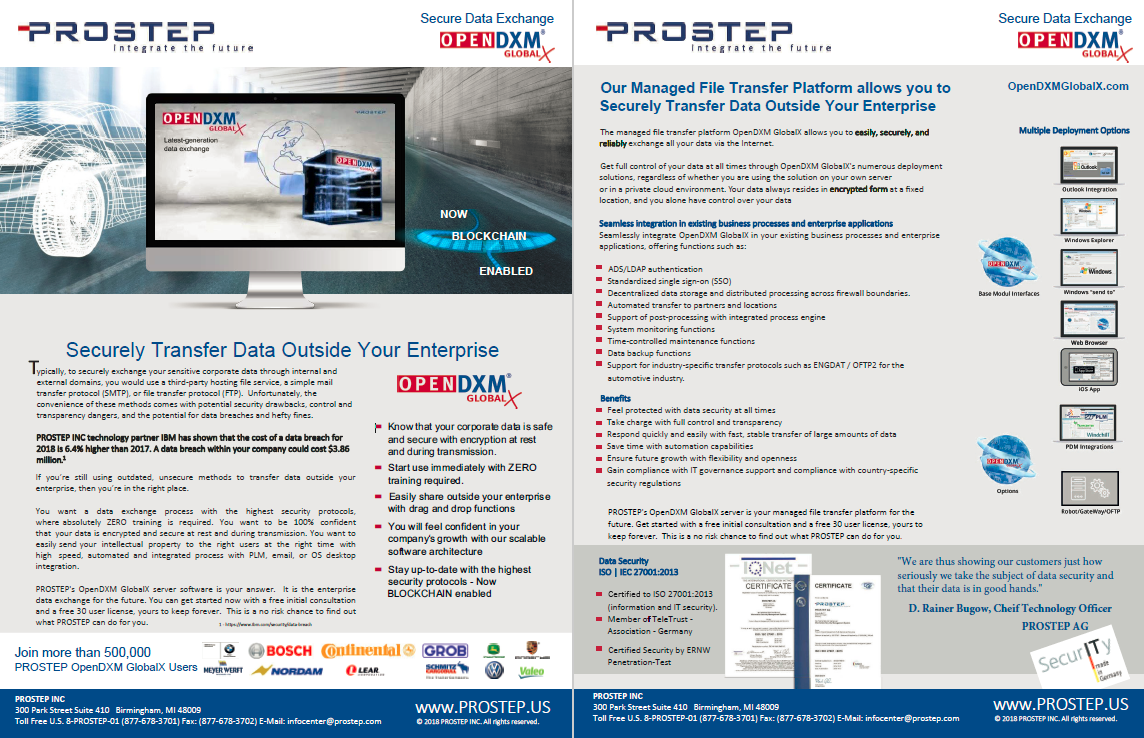 Data Security Know How and Protection 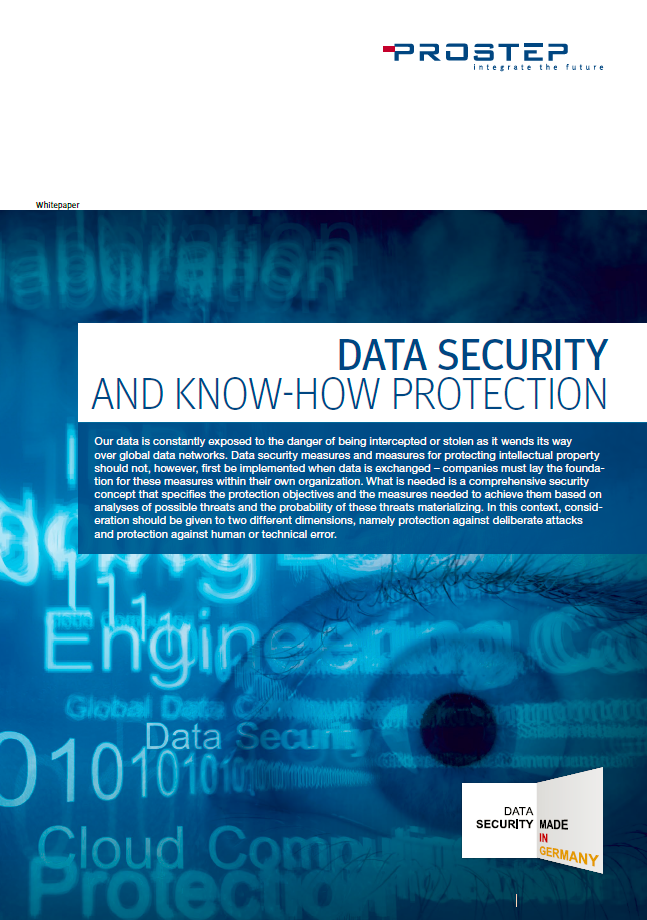 Data Exchange on the Fast Track 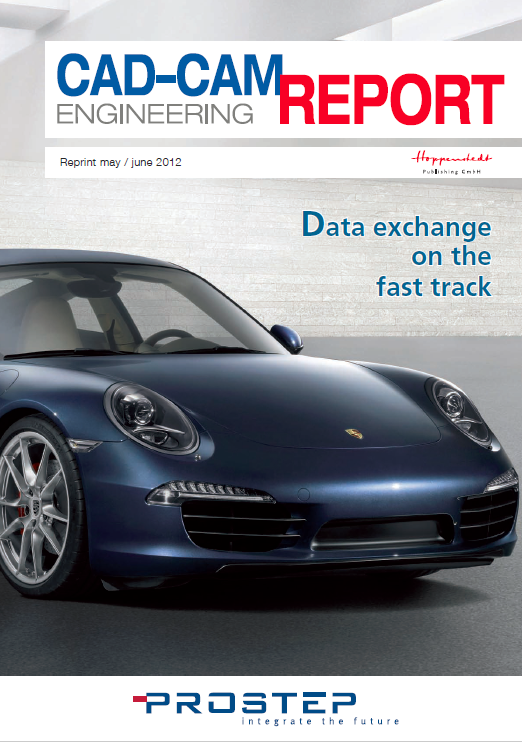 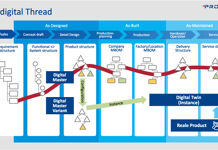 No Digital Twin without Digital Thread 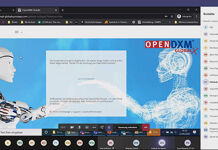 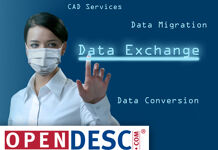 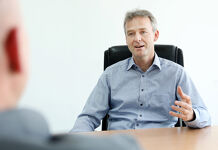