The Berlin-based company Atotech Deutschland GmbH owes its technological leadership in the surface finishing field to the fact that it not only produces the required special chemicals but also the systems used for their processing. At its site in Feucht, where the company employs a workforce of some 600 people, it develops and manufactures systems for the printed circuit board, chip carrier and semiconductor industry, as well as for decorative and functional surface finishing operations in the automotive industry. Atotech was founded in 1993 as the result of the merger between the Elf Atotech group of companies, M&T Harshaw and the electroplating division of Schering and was sold at the end of last year by the French oil group Total to the major American investment company Carlyle. The company employs some 4,000 people worldwide and achieves sales of approximately one billion.

“What’s so special about our platers is not only their outstanding quality but also the way in which they are perfectly suited to the employed materials,” stresses Heinz-Joachim Unger, Manager Technical Documentation / Training in Feucht. “As a result, our various tech centers across the globe are able to implement customer-specific requirements immediately on their test systems and demonstrate to our customers just how their solutions will function.”

Atotech’s customers come primarily from China, Japan, Korea and other Asian countries. This is a relatively conservative market, which makes it more difficult to develop new service offerings and business models. “Our systems are equipped with large numbers of sensors. If the customers were to give us access to their networks then we could offer them remote maintenance. However, most of them prefer to pay us to send a service engineer.” This makes it even more important to identify the required spare parts correctly.

Although the systems that are assembled in Feucht and in a production plant in China use similar modules, they are most certainly not standard products. This means that the engineering effort, and consequently also the amount of documentation, associated with each project is correspondingly high. Creating the electronic spare parts catalogs using the previous software solution was an extremely time-consuming task because the CAD models from Inventor had to be converted almost entirely manually into the Lattice 3D XVL format. What is more, converting the original data in this way had the disadvantage of disclosing the company’s precious know-how, explaining why the engineering department chose to use only tessellated JT models for the preparation of documentation. However, with the existing solution, the change of format would have been financially very expensive, which is why Unger decided to look for an alternative.

One of the main requirements placed on the new system was increased flexibility in terms of the visualization of different formats, without it being necessary for the recipients of the documents to install separate viewers. In the past, this had always led to problems because technical IT restrictions meant that customers and even the company’s own branch offices experienced difficulties installing and using the viewers delivered with the documentation. “What I therefore wanted was to have a software solution that is able to read documents using a normal viewer such as Adobe Reader which is installed on every computer,” explains Unger. This was one of the most important reasons for deciding in favor of the PROSTEP solution.

PROSTEP’s service content publishing solution makes it possible to integrate all types of documents in 3D PDF containers. This is a great advantage from Atotech’s perspective since the spare parts catalogs contain not only the pure spare parts information but also the complete service documentation: BOMs, 3D models, 2D drawings, circuit diagrams, information on electrical equipment, the OEM documentation for purchased parts, operating instructions for the systems and the catalog, as well as smart forms that make it possible to place an order for a spare part directly from within the catalog.

Atotech uses Autodesk Inventor for its mechanical engineering and Zuken’s E3.series software for its electronic engineering. The manuals are written using the docuglobe editorial system and, when embedded in the spare parts catalogs, are linked to other documents so that users can easily navigate through the documentation. In addition, Atotech uses the translation memory system from across to translate the documentation into the “pivot language” English, from which it is translated into the various national languages.

The 3D PDF containers simplify the search for specific documents thanks to their uniform document structure. Furthermore, users can either search for spare parts by their item numbers or navigate directly to the required part in the 3D model of the main assembly. However, one drawback of 3D navigation is the size of some of the installations. A catalog contains between 600 MB and 1.8 GB of data and this can lead to performance problems in the case of larger installations, as Unger says: “We are now working together with PROSTEP to optimize the application. Maybe we also need to structure the catalogs a little differently.”

Integrating 3d pdf technology in the existing IT environment

​PROSTEP also supported Atotech during the task of integrating the 3D PDF solution in the existing IT landscape, and in particular with interfacing to the SAP ERP system and the PRO*FILE PDM system. The order BOMs can be exported to the PROSTEP solution via the SAP interface, and the order information can be automatically read from the interactive PDF forms and transferred to the materials management system. On the basis of the BOMs, all the documents in the folders set up for catalog creation can be linked to one another practically at the touch of a button.

At present, the PDM interface is primarily used to store and manage the completed spare parts catalogs and the data used in their preparation in a way that complies with CE conformity requirements. Theoretically, this means that all Atotech employees worldwide can access the service documentation online and display it using the normal Adobe Reader and are able to do this even from mobile terminal devices, provided that they have the necessary access rights. However, the PDM system has not yet gone live in all the company’s branches worldwide. This means that the spare parts catalogs are still burned on CD and extracts from them printed so that they can be distributed to the branches and end customers – a task that requires some logistical effort. Unger is hoping for a mind-change in the organization. This would not just be desirable for reasons of sustainability but would also bring about considerable cost savings.

Aside from the cost savings for the procurement and maintenance of the software compared to the previous system, one of the greatest benefits of the PROSTEP solution lies in the enormous amount of time saved when producing the catalogs. “In the past, it took nearly a week to find and prepare the data and create the spare parts catalogs,” says Unger. “Now I need no more than four hours.” In addition, up to 50 employees can use the new application at the same time whereas, in the past, they had to share a single workstation license. Even though the documentation department has only four employees, Unger believes that in the future it will be possible for on-site personnel to update existing catalogs when changes are made to the installations.

​Gaps persist in the process chain

Unger expects further potential for rationalization from the end-to-end digitalization of the process chain between engineering and documentation, thus further automating the catalog creation process. Currently the CAD data from Inventor is not yet managed with PRO*FILE, with the result that the engineers have to prepare the JT models of their modules and assemblies manually and store these in the file folder for the spare parts catalogs so that they can be found by the PROSTEP solution. PDM-assisted engineering data management would make it possible to derive the JT models automatically and integrate them in the spare parts catalogs. “We have defined the processes in cooperation with PROSTEP. They merely need to be implemented, which will take no longer than two man-days,” says Unger, who would like to see a little more communication between the departments on this issue.

PROSTEP’s 3D PDF has been in productive use at Atotech since May of this year, and it is already contributing to the more efficient creation of spare parts catalogs, as Unger stresses in concluding: “The task now is to further improve the application before we can start to turn our attention to further automating the production of documentation.” 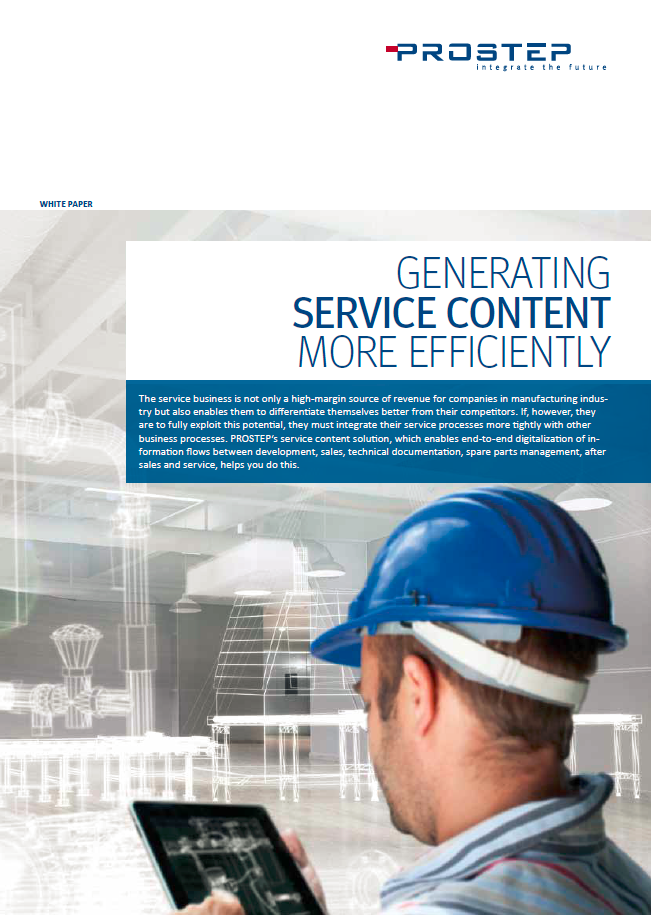 ​3D Formats in the Field of Enginering 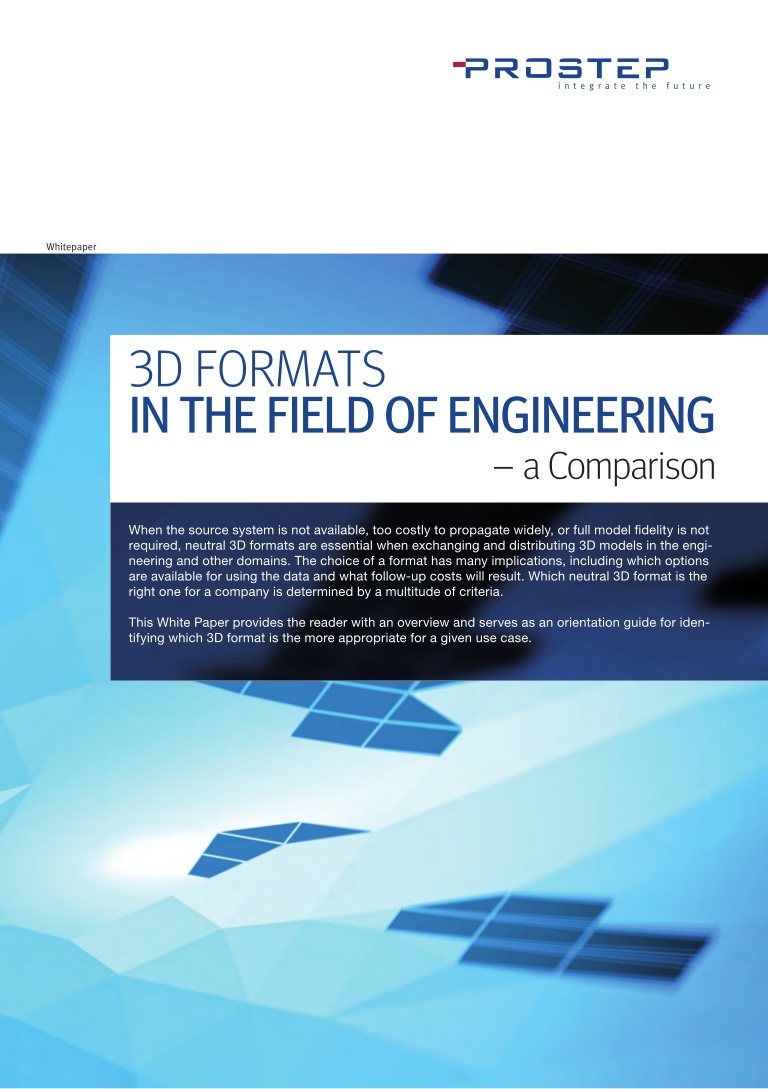 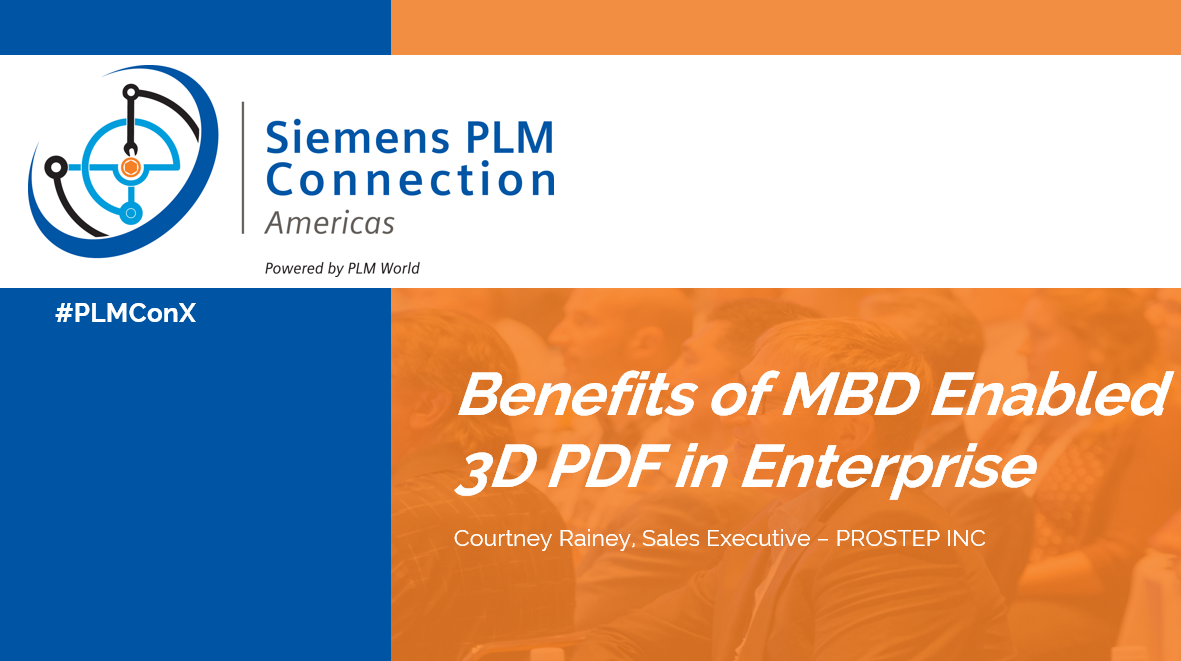